On Settling In and Happiness: A Pig Update Continues

Pig's moving day dawned bright and warm. I was thankful, as no one likes doing new herd introductions in the cold and wet. Plus, juggling blanketing on top of transitioning back to full field board is no ones idea of simple.

Pig was loaded into the trailer and on his way quickly.
He arrived at the new place completely soaked through with sweat (I'm so glad I spent all that time carefully bathing him the day before). However, he looked right to me to tell him where to go and what to do, as if we were at a show. That gave me some heart. My beloved gentleman was still in there, ready to come back out and blossom again.

We spent some time familiarizing Pig with the property and the edges of his new turnout field. I didn't expect any bad behavior out of him in this new place, and he lived up to my expectations.
Gradually we began to introduce him to his pasture mates over the fence. There was the expected squealing from Pig, but overall things seemed quite civilized.
Finally, I convinced the barn manager that Pig would be just fine if we tossed him out in the field. He's been introduced to so many field board situations since I've owned him. I know him to be very smart about introductions and highly concerned with his own self preservation. Plus, he's large and quite fast. I have very few actual concerns about him. 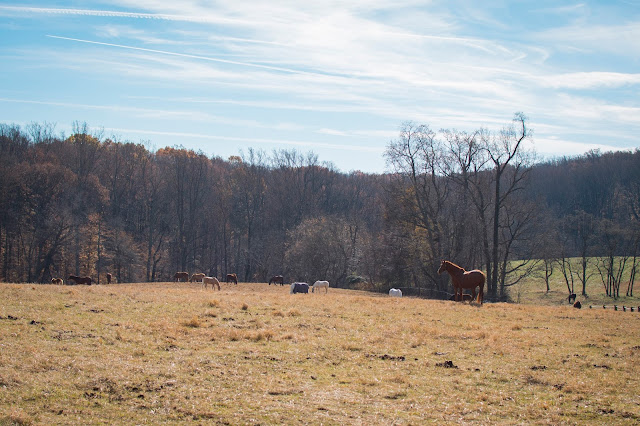 As it happens, I know my horse. Pig calmly and meekly met every horse who presented itself to him, but refused to give ground to any bullies trying to run him off or to allow himself to be goaded into a fight. The others quickly lost interest in him, and he stuck to the outskirts of the herd, as he normally does when new.
As the day went on, he gradually met more of the herd. Like this ancient arab/welsh pony...
And this gelding who wanted very much to be his friend...
This incredibly poofy and tiny halflinger...
And this fairly new to the pasture Arabian, who was desperate for a play mate...
Eventually Pig was surrounded by a group of horses who found him non-threatening enough to be included in their grazing posse.
I think herd dynamics are incredibly interesting to watch, so I stayed glued to the field most of the day. Eventually I did pry myself away, content that Pig was settled enough to be okay overnight. The next day, I pulled in excited to see how he was liking the place. I needn't have worried.
Pig greeted me with cheerful ears and thrust his head into my hands immediately. It was almost as if the anguish of the last few months was being erased minute by minute. Immediately I knew this was turning out to be a good fit.
I groomed, fed, and cuddled him. Letting him explore his new barn area in the growing dark. Then I tossed him back out, vowing to make time to ride him on my next visit.
The next night he was more integrated with the herd, no longer standing completely alone. He was still off mostly by himself, but had a grazing companion standing fairly near. I pulled him out and gave him a quick groom while he ate his small bit of grain. Then I tossed a bridle on him and we headed off to explore the lighted outdoor ring.
While slightly spooky and incredibly stiff, Pig was a good boy for his first ride at the new place. I pushed him a bit to see how out of shape he really is, and where he needs extra work to stay strong and limber. However, he handled everything with grace.
By Friday he was more settled than I'd ever seen him in a new place. I caught him lying down napping, something it will often take him weeks to do in a new field. He continues to be happy and his more snuggly and curious nature seem to be coming back quickly.
Part of my Black Friday shopping included a bareback pad for Pig. I don't have the funds to buy a new saddle just for my retired old man, but I figured a pad would give me a little extra security on rides. The old man can still have moments of sass, after all.
However, I seem to have underestimated the growing girth size of my old man. The pad barely fits around him, and is on the last hole on both sides. I think it will work, but I'm considering finding a different option for him. In a few test runs, it does provide me with extra stability. So at least it's working there.
We've been getting some looks with him all decked out in a double bridle and a bareback pad, but at this point I'm pretty used to those. I'm working on reassembling his old frankensnaffle to use with his bradoon, but don't feel rushed to pull that together yet.
We did manage to get a bit more exploring done this weekend, heading out on one of the nearby trails with Lyra. Once I get more comfortable with the pad (And Pig puts on some more fitness as he is woefully out of shape), we'll start going on the longer jaunts available to us. I'm excited to check out one trail in particular. It's rumored to lead to a very lovely overlook of the nearby Potomac River. I'm hoping to get some good photos out there!
So far, Pig and I both couldn't be happier with the place. Cheers to a long and happy time here!
Labels: Day-in-the-life Guinness moving