Looking Back: Bast Meets Field Board

Taking a pause from the training recap of Bast to share the story of turning the child-pony out in field board for the first time. It's a fun story, and everyone loves watching horses gallop around like idiots. So, without further ado, enjoy!
I had always intended to keep my new horse in field board. For starters, I can't afford stall board at my farm. But besides that, I have always felt horses do better with more turnout. Their feet are stronger, their muscles stay loose, they maintain basic fitness levels, and they're usually happier. Plus, my schedule doesn't allow me to ride every day. I hate the thought of a young horse standing in the stall for long periods of time without getting out, even more so when that horse is a young energetic ex racehorse. I'd rather get on a young horse who's had time to work out his crazies on his own schedule, thank you very much.

Still, when I brought Bast home I wasn't sure how he'd take to field board. I knew he'd been out with buddies full time as a young thing, but I didn't think he'd been out like that in years. I also didn't know how he would do turned out with other horses, or if he would handle inclement weather okay. I also worried he might walk off all the weight he had on him, a legitimate concern with a young horse prone to nervousness. He'd been very good in his private turnout, but adding other horses can completely change things.

In the face of all these concerns, I planned to chuck him out as soon as he passed his pre-purchase exam. As my luck would dictate, a massive storm rolled over the horizon just as the exam wrapped up. The timing couldn't have been worse, and I knew my baby horse would need to acclimate to stormy weather at the same time he would meet his new herdmates.
In case anyone is considering reenacting this scenario, I do not recommend it. Unfortunately, I was losing access to the quarantine stall where I'd been keeping Bast and had to go ahead.

We waited until a lull in the storm to begin the introduction.
The beginning of the introduction went well. There was some sniffing, and some squealing. I was very pleased by how nicely Bast allowed the other horses to investigate him. He was polite, but stood his ground when needed.
I've found it's just as important that a horse turned out in a group not allow others to push him around, beat him up, or run him off, as it is for a horse to not be overly aggressive. Bast had no problem asserting his personal space when he felt it was needed, which gave me confidence he would be safe.

As the storm started up again, the horses took off running.

I about had a heart attack as they ignored the massive lightening strikes and frolicked about. Thankfully, the herd leader decided he'd had enough of the weather and headed back to the shelter. The others followed him, but Bast was not allowed inside.

The older quarter horse in the field, and the chillest horse in the world, decided he'd had enough of being the lowest man on the totem pole. He pinned his ears at Bast, telling him in no uncertain terms that Bast would not be allowed to push him around. In fact, he would be pushing Bast around. For a long time, the older horse rushed at Bast, pushing him away from the other horses standing casually in the shelter.
I knew this was something that would pass. The herd leader was completely unfazed. He stood sleepily with a leg cocked, watching the situation unfold. If he'd felt Bast was a danger or a problem, he would have taken action. I knew eventually the older horse would consider his point made, and settle down. That would take some time, however.

When I left them for the night, the major storm was rolling out and a steady rain was falling. The horses were mostly calm, and I was reasonably reassured Bast would be fine. The next morning, the barn manager sent me a text to let me know things were completely chill. In a few more days, Bast was fast friends with the youngest of his pasture mates.
While it did take a long while for Bast to start to acclimate completely to field board, I never doubted he would adjust. Weather didn't seem to phase him. He never fence walked or demanded to come in. Instead, his biggest issues seemed to be insecurity and herd boundness. He became extremely attached to his herd mates, and would panic whenever the others moved away or made a noise outside of his sight. Leaving the field was traumatic. And so was returning, when he would lose his marbles and attempt to run me over or drag me. He had  begun completely relying on his herd mates instead of himself or humans for confidence.
I think these issues are completely rational and pretty normal for horses in Bast's position. In his life, I don't think he had really learned to look to people for confidence and encouragement. He has fantastic ground manners and basic training, but lacks that fundamental understanding. My experience with young throughbreds makes me feel this is not uncommon. I compare the training lack to a dog that knows obedience basics (sit, stay, come) but was never taught to recognize its own name (this is actually really commonly overlooked with dog training, and the lack is obvious when you get to more complex training). With time and careful experience, I thought I could help him look to people for confidence and direction. 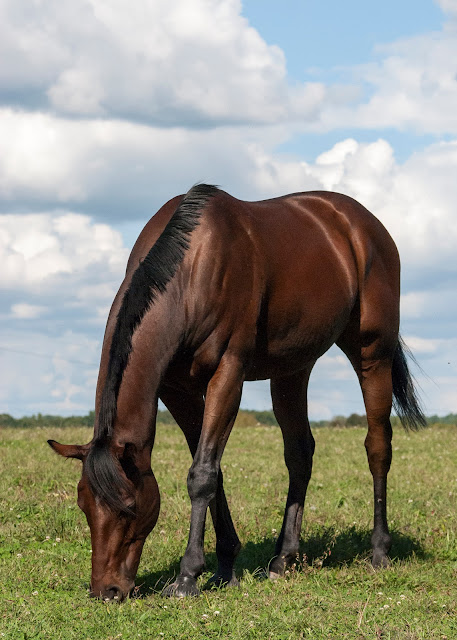