On Rejection and Moving: A Pig Update 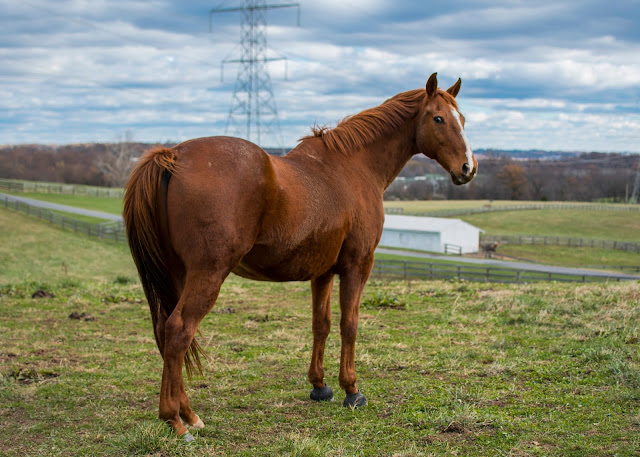 At the end of October, the therapy barn let me know Pig wasn't going to work out in the program. Over the month, our worst fears about his suitability had come to pass. His spookiness was only getting worse, not better. Worse still, the staff didn't think he was enjoying the work or the people. The decision was made to remove him from the program and relocate him to a full retirement home.
A large part of me expected this outcome. Since I've owned him, Pig has always proved himself to be a one person horse with a... quirky personality. It took months after I brought him home before he trusted me enough to go on hacks or exploratory hand walks. The number of times he spooked at something and almost knocked my teeth out in those early days cannot be counted. Eventually, he opened up and really bonded with me, but that relationship had limits.
Others were still viewed with suspicion by Pig. While he maintained his manners when being handled by them, he was coldly indifferent. Never cuddly to anyone, it took me years before I appreciated the small gestures of affection he allowed me alone. I have always described him as the consummate professional. He embodies the Victorian ideal of relationships, making sure to always keep PDA to a minimum. That said, over our time together he had become very warm and loving, at least with me. Gradually, he had begun expanding that warmth to others he met.
I have always trusted other's safety with him implicitly, but have been very protective of his emotional safety with others. Knowing his distrustful nature, it's only been in the last two years that he has been able to be ridden by others without taking it out on me when I hop back on him. (Seriously. This horse can hold a grudge. I once popped him in the mouth in response to him biting me, and he greeted me at the stall door by turning his butt to me for a week.) He's been so confident with others, I've even been letting others ride him when I have been out of town, something I'd never done in all the years I owned him.
I had hoped this and the easy work at the therapy place would allow him to mentally deal with multiple handlers, but it seems that was not the case. On top of being upset with too many people handling him, Pig also seemed very depressed by the lack of 24/7 turnout and busy barn aisle. He's a very serious professional horse who requires just the right atmosphere to do his job and quiet time to recuperate. Apparently without this everything is terrifying.
During the few weeks it took me to find him a new home, Pig became very depressed. It was so hard to see him moping in his stall. Every day his behavior was regressing, and he seemed to be losing his trust in me. Grooming him was impossible, as he would pace and fret. Taking him out of the stall for walks was to take your life in your hands, as he was completely feral and terrified of everything. The biggest stab in the heart for me was his complete refusal to let me touch his face, nose or ears.
Again, when I bought Pig, he was very much like this, and I wasn't allowed to come anywhere near his ears. Over the years, ear kisses and face hugs have become one of the ways he and I have shown each other affection. To once again be unable to touch his ears without a complete meltdown felt like losing the connection we had built. It hurt.
Finally I found the perfect barn for Pig. It was nearby (actually closer to the city than where Bast is) and surprisingly affordable. The whole place is basically set up as a retirement facility, and Pig would get to be out all the time with almost no one handling him but me. I made arrangements, and let the therapy place know when he would be leaving.
Realizing I didn't have much in the way of multiple grooming or first aid kits, I worked on assembling those things. Thankfully moving your horse over Thanksgiving weekend means you can take advantage of Black Friday deals to stock your second barn trunk. I also bought a store of grain, as the new place does not provide and I would have to take care of all feeding myself.
When the day came, I was looking very forward to giving Pig a new lease on life. I hoped he could find some peace and happiness, and begin to learn to enjoy his retirement.