I don't typically come on here just to complain about my bad days. However, the events of last Friday are the kind I think many of you will find relatable, hopefully they don't stress you out as much as they did me!

My very bad Friday actually started on back on Thanksgiving Day, when I noticed that Lyra had broken her left top canine. She'd been acting subdued for the whole week, but I couldn't figure out why. Seeing her tooth broken off, her strange behavior became very clear.
A vet visit the next week confirmed my suspicions, the tooth was broken in such a way that it would need to come out. Tooth infections (especially in canine teeth where the root is extremely deep) are nothing to joke around with. The blood barrier is very easy to breech there, and infections can quickly turn septic or get to the brain. (Consider this a PSA to make sure you and your animals go to the dentist regularly.)

So, Friday morning found me dropping Lyra off at the vet for what should be a fairly minor surgery. The vet tech dragged her off (she hates the vet), leaving me standing in the lobby with her leash and collar in my hand. Is there a more heartbreaking way to start your day?
From the vet I went back to the office. I was told Lyra would be ready for pick up sometime after 3:30 pm. While I was concerned because of the generic risks of anesthesia, I figured she'd be okay. However, I was waiting on a call from the barn manager at Pig's barn.
See, Pig had not been feeling well on Thursday night. He presented with a slew of strange symptoms (acting depressed, standing alone, moving slowly, breathing hard over minimal movement, lack of confidence or interest). When I grabbed him out of the field to give him his grain, he wasn't interested in the food. Instead he picked at the grass nearby and tried to just slowly meander back to his pasture.

I checked him for colic signs, but the horse hasn't really colicked while I have owned him. I don't really know what he would do in case of a colic. His heart rate was normal, however. So I didn't think he was really in pain. He drank a ton of water and passed some manure, so I figured he just had a bit of an upset stomach from gorging himself on the new hay bales. I asked the barn to give me an update, left him to see if he'd recover his spirits.
Friday afternoon, as I was expecting Lyra's vet to call and tell me she was done, I instead got a call from Pig's barn. He was hot when they went to blanket him, and seemed to be running a fever of 104! They called my vet, who suggested they give banamine ASAP to bring that fever down while they rushed out to see him.

Now I had a dilemma. The vet is 20 minutes from Pig's barn. They're both 35 minutes from work. I was at work. I would need to be in both places. Add to that getting to both was decidedly NOT reverse commuting in DC traffic on a Friday night when snow could fall at literally any moment. Stress levels multiplied.
I called Lyra's vet, concerned they hadn't alerted me to her being done yet. The receptionist told me she wouldn't be ready for pick up until 6. That bit of news allowed me to head straight to Pig's barn to meet the vet.

When I arrived, Pig had just broken his fever. He was covered in dried sweat, but seemed much more comfortable than the night before.
When the vet arrived, he went over him carefully and pulled blood to run tests. However, we quickly ruled most things out. The diagnosis of anaplasmosis was handed down, and we began IV antibiotics immediately. Banamine and more antibiotics were prescribed to follow up over the course of the week to keep the fever from returning and ensure a quick recovery.
With drugs on board, Pig scarfed up his grain (even with 22 antibiotic capsules in it) and regained cheerfulness and his typical incorrigible behavior with every minute. I tossed a sheet on him to protect him from the overnight wind, falling temps, and possible snow. Then dumped him back outside, with my vet's blessing.

Then, I jumped in the car to rush to pick up Lyra... which started a whole 'nother saga.
I expected Lyra to be a mess after surgery. It's been my experience with huskies that they tend to... talk after sedation. Imagine your dog telling you a long incoherent story where they keep getting lost and starting over, which makes them frustrated. Imagine this constantly for around 12 hours... starting with the 45 minute car ride home.
The squeaking actually doesn't bother me at all, and it usually subsides if you can keep in contact with the dog. Still, we had some hilarious moments on Friday night as Lyra tried hard to tell me about all the horrible things she'd been through that day...
The poor little dog and I cuddled together on the couch, where we both promptly fell asleep. Apparently it had been a long day. 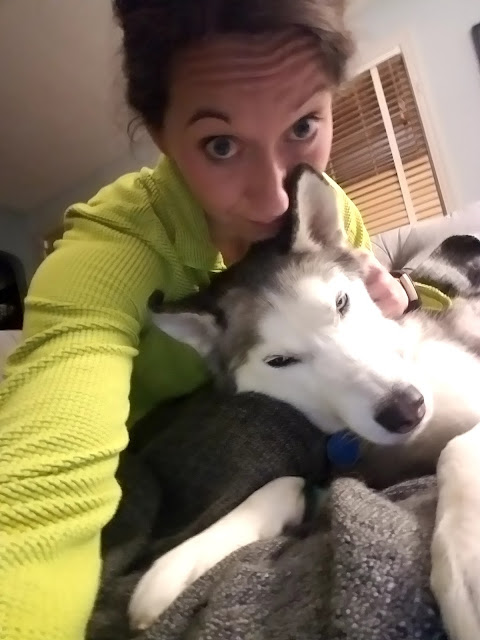 By Saturday morning, Lyra's face had swelled up massively. I was beginning to worry about the amount of swelling, and the fact that I couldn't get it to go down. She seemed to be in pain some, but otherwise not too bothered.
I called the vet and made arrangements to bring her in, braving DC drivers in the falling snow to get her there. The vet wasn't worried, but did tell me to watch for signs of a sinus fistula. Whatever those are? We headed off to check on Pig and ride Bast, while the snow continued to fall.
Pig seemed much improved! In fact, he seemed a bit cold. I tossed his medium on him, and put together a big meal of ration balancer mixed with alfalfa pellets. I'm worried he'll start to lose weight with the the cold, stress, and sickness. I ended up picking up some cocosoya oil for his feed, too. Hopefully with just a little more attention to his diet, I can keep him looking plump through this rough patch.
Lyra seemed perkier in the snow, where she was paying less attention to her mouth pain. We ended up wrapping up the night and heading home late, giving the roads time to clear. We fell into bed exhausted, but that unfortunately didn't last.
Around 3am, Lyra woke me up with licking. She was licking anything, and everything. The air, her paws, the shaved bit on her front leg, the bed. It didn't matter. She was licking it.

Her swelling was down, but she seemed much more uncomfortable. She didn't want to lay down, and she groaned when she had to rest her head. The licking seemed to be an attempt to rid herself of a bad taste in her mouth. I started to worry about sinus drainage or an infection, so back to the vet we went again.
This time the vet was more concerned. Apparently the incision site was much more inflamed looking than it should be. I was sent home with antibiotics and stronger pain meds for the little dear.

Lyra and I split a bowl of soup at Panera so she could get her antibiotics right away, and not throw them back up. They actually seemed to be working by the end of the day, as her swelling kept going down and down. Plus, her comfort seemed improved and she wasn't licking quite as much... until we got home.
I ended up having to put her cone on when I wasn't able to get after her about licking her legs. I loaded her up with her meds, too. They seemed to knock her back a bit. She's definitely pathetic, but I think the antibiotics will keep everything clearing up quickly.

Fingers crossed both my sick animals keep improving. This is a crazy busy week at work that I'm already starting behind, and I can't keep running out of the office to emergency calls and vet visits. Turns out life is really hard when you're the only one who can be out there, and you need to be in two places at once. I'm hoping I can keep my focus at work when I need it, not on my pathetic creatures at home!

Here's to improved health across the board!
Labels: anaplasmosis Day-in-the-life Guinness Lyra Vet