We Came. We Screamed. We Won? 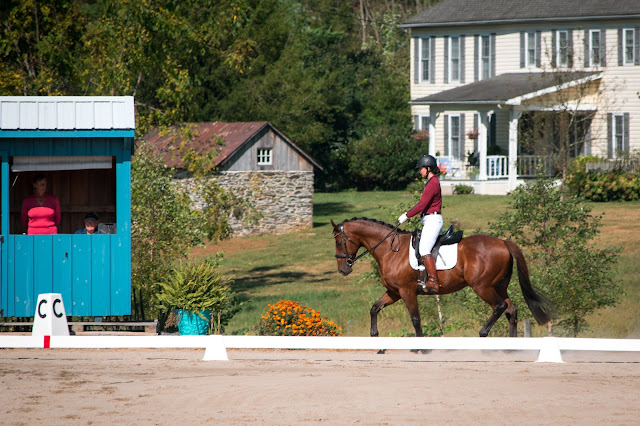 Note, I have a much more in depth post coming about the show (complete with test and score breakdown). However, I'm currently trying to get my life turned around so I can be out the door for a work trip tomorrow morning. With that in mind, here's a brief update on the show!

Act 1: In Which Bast Attempts to Get Us Eliminated Before Leaving the Property

I showed up at the farm at sunrise, ready to collect my beast and head to the show grounds. At first all looked to be in order, until Bast turned his head and I caught a glimpse of it ... a bloodied lip. Cue the hysterics (on my end). The wound is a nothing, and I wouldn't even give it a second look. Except, the USEF has a zero tolerance on blood in the mouth, and this could very much look like my horse was bleeding during my ride.
I knew my first step on getting to the show grounds would be to talk to the TD. I wanted an official to see the issue before I even tacked up. It was in my favor that the missing chunk was not bleeding, however due to the fresh nature of the wound it was bright red.

The TD agreed that the whole thing was the worst of luck. She told me if it blotted in a bit check as bleeding, I would be eliminated. I told her that was fair, and hoped it wouldn't start bleeding as he moved around. Thankfully it remained unchanged throughout the day, and didn't even ooze. Tragedy Averted.

Act 2: In Which Our Intrepid Equine Hero Undergoes Great Distress and Discovers His Mighty Voice

We trailered in with Bast's turnout buddy, which I'll admit to being nervous about. These two are pretty attached, and I knew Bast would be a bit looky for his friend. Unfortunately, I did not prepare for said friend to call out during my Training 3 warm up, leading Bast to go through a complete mental breakdown. Even after his friend was lead away, The Bay Screamer could not get a handle on his emotions. At one point, I kid you not, he neighed so hard my legs vibrated off his sides.

He screamed so much, I'd honestly be surprised if his throat isn't sore today.
The screaming continued into our Training 3 class, despite my efforts to get his attention back on his work. I wouldn't have minded the noise if it wasn't accompanied by him attempting to wrench his head violently around mid trumpeting. Fun fact, y'all: It's a little hard to execute a serpentine with a horse who cannot turn his body to the left because his lungs are busy powering up the song of his people. Ugh. Horses are dumb, guys.

Act 3: In Which The Wild Songster Wins All The Things Simply For Existing

This show is one of the few dressage shows in the area that does Thoroughbred Incentive Program awards. After submitting my entry without Bast's TIP numbers, I sent a frantic email to the secretary asking if she could please, please, please add that to my entry. She was so very kind to do so. Be nice to your show secretaries, people. They work hard to right the wrongs of the dumb and tardy like myself.
When I piloted my 2x4 with a singing problem around Training 3, I was pretty sure we'd lost the chance to take any awards home. (I was also sure we'd lost our pride. But that's another problem altogether.) Imagine my surprise when I found out we were high point TIP champs for Training!

The surprises didn't end there. Bast ended up being the only thoroughbred on the property, which meant we walked away with every TIP award available.
I kinda love dressage TIP. In this area it's really hard to win anything in eventing, as it's teeming with thoroughbreds. Meanwhile the dressage world here has only a handful, and it's easy to show up and walk away with some kind of (ahem) incentive. I love it, and this program is just the greatest. I would have happily shared some of this booty with another TB, in exchange for seeing more in the sport. Just, maybe not that tumbler. It's too awesome, and I love it.

Act 4: In Which A Redheaded Beauty Just Says No to Show

After we got Bast home and settled back into turnout with his friends, I headed down to trim Pig's feet. It was so nice to spend time with the old man, as I haven't been able to really see him in over a week. He saw me walk up in my white breeches, smelling like horse show, and carrying a set of shipping boots and immediately gave me some side eye.
I had to laugh. I gave him a kiss on the nose and let him know he was not headed to this show. You could almost see him give a sigh of relief, then relax. While on this day I missed how confident (and quiet) this horse always was at shows, he was quite a difficult character to manage in the ring. Bast is much simpler to show, even when he's screaming his fool head off. Still, I had to give Pig a lot of thanks for all the lessons he's quietly taught me in the show ring. It's funny how happy he is to not be called into show service any longer.
Well, there you have it. A brief overview of our Wednesday show day. Hopefully I'm able to actually sit down and write up the show tomorrow. I have a lot to say about the tests themselves, and a lot to say about where Bast's training is currently sitting. Until then, I better prep for this work event (and do all this laundry)!
Labels: elimination horse show prizes screaming Showing thoroughbred TIP