Getting the Boys Together

This whole move for the boys came on the heels of a trip into the mountains followed by 5 long conference days out of town. Needless to say, I wasn't really prepared to deal with the stress of stirring up the home life of both my boys. Thankfully they were there for me, and made things pretty low stress on day one.
This has to be the least eventful initial herd introduction I've ever seen. We started by adding Bast and the mare in the field together. She ignored Bast completely while the other two geldings were out of the field. Well, sorta. Once Bast got between her and the fenceline where "her boys" were standing. She was ... displeased.
The moment he moved away, she calmed down. So honestly, things were pretty uneventful. Well, until we added in Pig, that is.
The moment Pig came in the field, he made a beeline for Bast. The two boys have known each other for quite awhile, and Pig was so excited to hang out with his brother. He got a little too close initially, startling Bast. After some screaming and flailing from the youngster, the two got down to getting to know each other better.
At this point the mare decided didn't want this stranger anywhere near Pig, and she nearly ran Pig down to get him out of the "danger zone" as she saw it.
Poor Piggy spent the rest of the day getting chased around the field by his girlfriend, in an effort to protect him from his brother. It was kinda hilarious, when you overlooked how sore the running and cutting horse stops started to make him. Thankfully all of that stiffness seems to have abated a few days later.
By the time the last gelding was added in, the mare had whipped her boys together and was pushing them away from the stranger danger situation of Bast.
Eventually, she had them all running up toward the main field. Bast was left behind for a minute, but quickly started trotting after the group.
Pig pulled a fast one on the mare. He waited till she was full tilt running, and then slowed so he could hang out with his brother. The two boys took off in a gallop across the pasture. It was so fun to watch them go. I love my goofy ex-racehorses and how much they love to run. 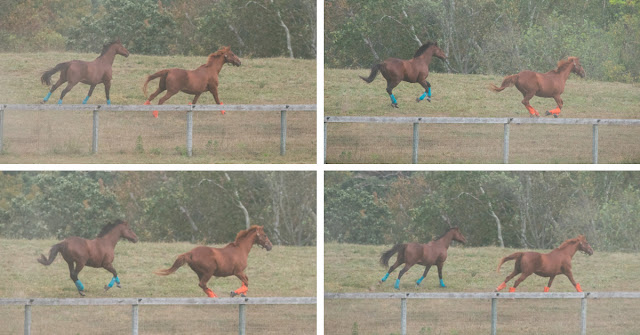 Initially Pig was waiting for Bast to catch up. Once he did, the brakes were off and Pig started hauling across the field, leaving his brother behind. Bast tried his hardest to keep up, but Pig is extremely fast even in his elder years. Poor Bast just couldn't cut it with the big kid. I found this extremely hilarious.
Back in the field. The three original crew members hung out together in the rested pasture in the back. Bast kept to himself most of the day, hanging out in the other side of the pasture.

By the end of the evening, the four of them were in the same part of the field. Bast was slowly gaining the trust of the mare and moving closer to the group. Things were pretty settled, though. I felt completely comfortable leaving them.
The next afternoon found Bast running himself to exhaustion. He was trotting from the group to the gate. Still rather unsettled, but not screaming or too beyond himself to eat. He was clearly just trying to figure out if he was supposed to stay there. Sorry, dude. But yes.
I decided Bast was wearing himself out just fine. And I left for the day after checking him over. Things seem to be moving along just fine.

It's been interesting to compare my two boys side by side from afar. Pig definitely has more "presence" than Bast. He's the nicer mover of the two, by a long shot. I was so lucky to have that old horse come into my life, and to still have him around. Bast is a really lovely horse, too. It's interesting to see how much of who he is I've made at this point, and how much of him is personality and genetics. He's certainly handsome, and has a lovely trot.
With luck this new pasture dynamic will settle in. I'm interested to see where things stand in a week. It often takes a long time for herd dynamics to settle in (and even then they can often change). Continue to keep your fingers crossed the emotions settle quickly!