Then and Now: Two Years With Bast

I’m finding it hard to believe it was only two years ago this little bay racehorse was walking into my life. He sauntered off the trailer, looking all svelte and race-buff, only a month after finishing his last race at Laurel Park. While the last two years were full of ups and downs (and sometimes throughs … ugh), he’s turned into a completely different animal from the one who first stepped onto the farm in 2017.
While I try to continually look back at where we’ve come from and compare that to where we are, there’s something about appreciating the Then v. Now that is just so very fun.. and startling. So let’s dive in, shall we? 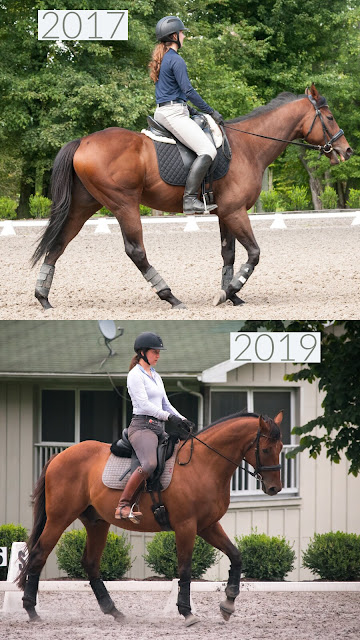 I think the walk is the hardest gait to evaluate in photos. Especially with a lower level horse. However, the balance shift in the walk is pretty noticeable these days. Bast has always had a pretty nice walk, but today he's engaging his abs more and being more thoughtful about placing his steps. 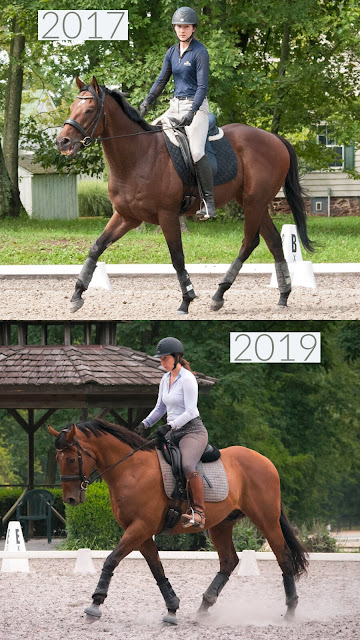 Wow. Is that even the same horse? I honestly didn't think there had been this big of a difference in Bast's way of going until I actually started comparing. Shows me just how much incremental change can sneak up on you! He's made leaps and bounds recently with his engagement and balance, but even so it's obvious just how much his way of moving has changed. He moves so uphill now compared to that dropped wither trot of before. I'm in awe. 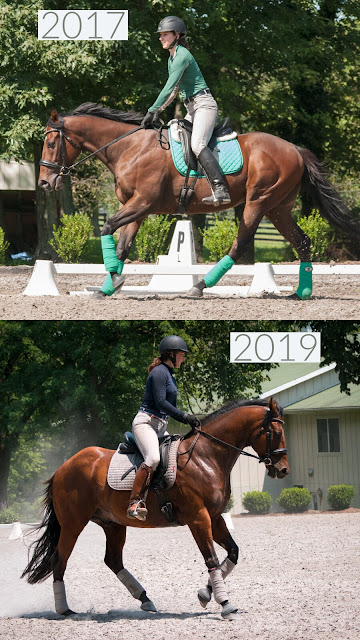 I'm not going to lie, sometimes I feel like we more resemble the 2017 photo. However, I know this progress is very real. Bast's canter was abysmal when he came to me. It was tense and extremely unbalanced. If he wasn't running to catch his balance, then he was bolting top speed. His hind leg reach was good, but his knowledge using his topline and musculature for balance and engagement was non-existent. This is the change in the way a horse uses itself that trainers of OTTBs talk about. It's a massive change that just doesn't happen overnight. 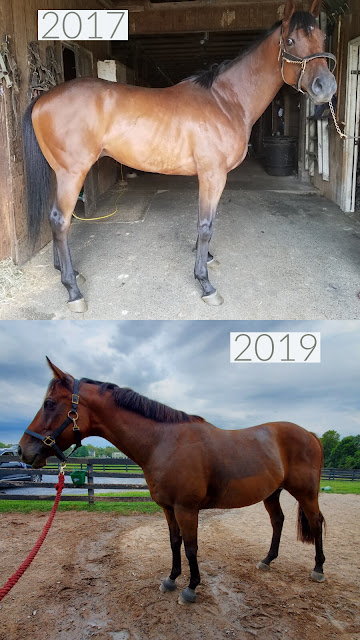 Can we even? Again, I feel like you wouldn't even know this was the same horse. I love how much his muscling has changed, but I'm really in love with how much his stance has improved. He stands balanced and square most of the time now. Unlike in the 2017 photo, that square stance seems to root him solidly to the ground. He looks weedy in the top picture, but he looks fit and strong in the bottom one. I'll take it!

Confidence
This isn't a before/after shot. It's almost impossible to capture a lack of confidence changes in a single photo. Fortunately, it's very possible for me to share what a well developed level of confidence looks like in pictures.
In the last year, Bast's confidence has skyrocketed. He's gone from panicking when ridden away from his field mates to cross country schooling, jumping 2ft courses, and kicking ass at recognized dressage shows.
He can be ridden out in all weather, and cares about none of it. He goes on solo trail rides ranging far off property, and is fine. He crosses water (okay, sometimes we jump it), gallops politely both in company and alone, and even handles crazy warm up rings without a care.
He's done everything I've asked barefoot. He herds dogs and his runaway brother with the handiness of a trained cowpony. He's extremely cuddly, getting offended if I don't spend time loving on him. He can go 4 days of intense dressage rides and still come up to me in the field with a cheerful expression (but would probably appreciate a long and low trot day, thnx). He walks nicely in hand, rides bareback on occasion, and every day I think about how he's turning into the all around horse I really enjoy.
Of course there are still plenty of rough patches. The left lead canter is currently a balance disaster. He spooks at the third rose bush on the entry to the arena every single day. His go-to defense mechanism is still 100% flight, though at least he has brakes now. Accepting contact is still a developing skill, though he's learning more and more every day.
All of Bast's changes are so wild to me. I can’t wait to see what the next year holds with this little bay firecracker. Especially now that he’s starting to show glimmers of being a grown up dressage horse in his coming 8 year old year. Will he learn to do flying changes? Will he show second level? Will he become an event horse? Who knows, but I'm excited to get started on the long slow work.