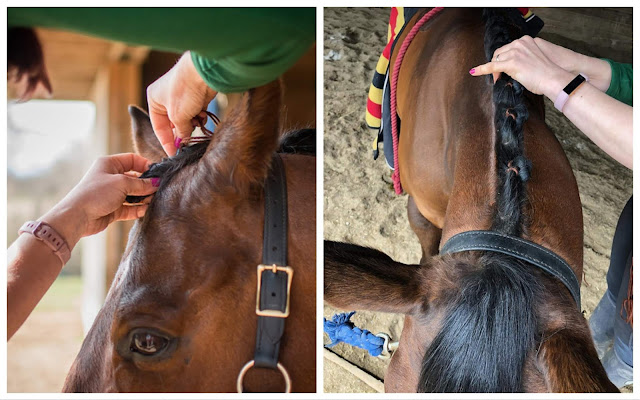 The first part of the L Program focuses on teaching judging candidates how to evaluate the gaits of the horse, the connection, and the overall training picture. For the Training level riders, this was done in a group setting instead of through riding individual tests. We were asked to show each gait for a time period, performing large patterns as we could fit them in the ring.

As I mentioned yesterday, the crowded and noisy atmosphere created by nearly 80 spectators and auditors made Bast quite tense. I had warmed up extensively in the trot and canter, attempting to take the edge off of his reactions. I also had the benefit of Emma in the crowd and well stocked with “emergency-mints”. She was able to reach out and feed him one early in the process, to help him associate the rolling mass with good things.
The forward work, mints, and some additional shoulder in on the crowd side resulted in a horse that, while tense, was quite rideable. I felt as though he was one loud noise from a minor explosion, but overall was happy with how much trust he placed in me. However, the tension was showing in his gaits. His trot rhythm suffered the most obviously. There was a distinct lack of swing in his trot. Instead, he reminded me of the horses ridden through the upscale European auction houses—all very forward and stiff action. While I tried some leg yield and shoulder in to try to loosen him behind the saddle, his mental anguish was keeping him from truly letting go.
I say all this just to explain the horse I had as the gait evaluations began.

We started at the walk. Yukins explained how she wanted the riders to show the walk, both on contact and off. Using the ring to do large figures. She was not very specific, leaving it to the riders to show the horse as they saw best.
I started the walk in contact, on purpose. Bast has a tendency, when nervous especially, to gnash his teeth on a loose rein and twist his head. I hoped by riding him forward into contact at the walk, we could get moving forward enough to get him seeking the stretch of the looser rein. This worked, for the most part.
My first attempt at a loose rein walk was abysmal. Bast was clearly not ready, and his tension got the best of him. I quickly reeled him back into contact, and pushed him straight and forward again. The next time we tried was along the long side by the crowed. He was much more ready for the stretch by this point, and oscillated his topline nicely. Still, his tension was very apparent in his “violent tongue movements” (as later described by a program participant).
The walk right before the trot was some of the best of the whole ride, which led to a pretty decent trot transition. As we started our trot work, my goal was to slow the tempo. In the video I see how I could have ridden him more forward and up, instead of allowing his slower pace to tip us both more forward. Along the diagonals was some of our best trot work, where I pushed him to stay straight and in an uphill balance. I am starting to think lengthen in our diagonals, and I think it is producing a nicer trot.
Unfortunately we had one slip up in the far corner where tension got the best of my boy. I was asking for him to yield more of his ribcage in the short side, but he took this for an invitation to spring (squealing) into a bargy canter. Honestly, his squeal made me giggle as I pulled him back together.

Soon it was time to show off the canter, which Yukins had us show one at a time. I want to take a moment to be happy with Bast’s canter departs. They were very up, and not necessarily very pretty. However, he did transition to the canter obediently and with little use of the “thrusters”. Much improved transitions from our show the weekend prior. These still take such a careful ride from me, and we continue to fine tune them. I purposefully placed all my transitions at the far end of the ring from the auditors/participants. I did this both because of how amped and distracted the crowd made my horse, as well as because I know they are a weak point for us.
Unfortunately the first bit of canter started off extremely tense. Bast was so tight behind the saddle I felt as if he was swapping behind. He felt… hoppy. When pushing him forward failed to knock him out of it, I tapped him lightly with the whip, which caused him to buck out and lose his balance. I would be mad, except his canter post buck was much more relaxed and open. Apparently we just needed to crack our back to work those kinks out of the back.
The second direction of canter was lovely, and he did a good job of showing some of the nice uphill moments we have been working so hard to cultivate. While the rhythm was still off and the connection and thoroughness needed work, I was really happy with how he was showing himself.
We returned to the line, standing while the last horse cantered. Then we stood while the first horse was evaluated. All this standing and the 45-50 minutes of active work finally soaked into Bast's brain. He began to actually relax and look around. By the time our turn to be critiqued came around, he was almost a different horse.
This really was the important thing for me. My young horse was able to come into a big environment, be intimidated, and hang around long enough to realize he wasn't going to get eaten, then work relaxed and calm. That is invaluable experience that will pay off in the long run. This was the biggest takeaway for me, rather than the actual clinic-style critique and advice, which I will get to tomorrow...
Labels: clinic l program