I have split up my overview into several days. Yesterday, the horse management choices, questionable choices, and basic test overview (including score spoilers). Today, a detailed test breakdown. Sometime in the future? Pro photos. Let's go for round two!
As I wrote yesterday, relaxation was my main concern for our first test. Unfortunately, no media exists currently of my first test, so you'll have to just trust me!
The first test of the day is 3-2, which I feel is a good test for us. The movements ride well, overall. The changes are set up nicely, and we get to show off a bit of our half pass. Unfortunately without a good amount of power behind us, our score just couldn't get higher than a 57%.
We were dinged on the entry by my loss of Pig's attention during the halt. He threw his head up to look at the wind whipping across the field beside us. He didn't throw a fit when I picked up the reins though, so I'm calling this a wash. Meanwhile, our lengthening was nothing to write home about. In fact, while riding the movement I wondered if I could even feel a difference. I guess the judge was being lenient in our score!

The shoulder-in right was nailed for too much neck bend, which is completely fair. We are bendier to the left. Renver was nailed for lacking bend and suppleness, which is probably completely true. I didn't school this movement enough in the warm up. Schooling this is 100% necessary. Renver was a co-efficient, so that hurt our score a bit. That said, the shoulder ins were the highlight of our trot work, other than the half passes.
I like how the trot half passes ride in 3-2. There's a bit of a long trot break between the two for me to prepare Pig for the change of bend. The judge remarked that she would like to see better bend and suppleness, but that was an overall theme for the whole test. More, more, more.

Our walk work started gaining us points. Our first turn on the haunches scored a 7! Of course, the walk was largely commented as being "stiff". The rest of the walk work gained us 6s, which is really the minimum score I should be collecting there. I left too many points on the table by just not riding the snot out of those sections.
The canter began roughly. The right lead is our most difficult, and started us out. I found myself having to chase down Pig's wayward right haunch. This got me into trouble on the half pass (shoulder was clearly not always leading the movement!). The first flying change waited for my aids, but was late behind. I think I just forgot to close my legs. The cue is only part of the change, I really need to support through the whole thing.

The other direction of canter half pass scored a 5.5, which I am sorely discouraged about, I know I lost my focus and didn't get enough jump or bend. It's a rough comment to get in the test, but fixable. After this. the canter starts picking up more points. We scored a 6.5 on our last change, which blows my mind after the trials and tribulations we've been through with that movement.

Of course right after the change, I lost my place in the test and forgot to the do the release of reins at the canter circle and went straight into the extended canter. I'm really bummed about this, because our change was so good that I had Pig totally set up for the circle, and I did an awesome lengthening that never got scored instead. As such, we got a 6 on the release of reins, but the comment doesn't give me a lot of guidance on how to improve the score. I think this judge just had our highest score set in her mind as a 6, so we had to work extremely hard to get anything higher. Bummer.

The second attempt at the extended canter scored a 6.5, but didn't feel as uphill at the first, unscored, attempt. Oops.
Looking at the collectives, I feel affirmed in my belief that this judge simply didn't want to give me higher than a 6 for any movement. The comments on most movements can be summed up as "needs more", which we are capable of to a small degree-- but not much. Remind me not to show under this judge again, it's really not worth it. For an honest test from my horse, I am kind of disappointed in the score. Though, I cannot say it is unfair. The comments were spot on, and the judge certainly had a good eye for our issues.
After having read "needs more" comments on the first test, I was determined to go into 3-1 with a little more fire. That said, I still wanted to keep the relaxation of the first test. I think I pushed slightly too far over the relaxation line, because I lost my soft and lovely changes, but the rest of the test worked out.
After watching the video of this ride, I have to say that I am proud of my riding. While my position left something to be desired (stahp collapsing in the front of your torso, Self!), I made a ton of smart decisions and did not leave a single easy point on the table.

While this judge had many of the same comments at the previous one ("more bend" being paramount), she seemed much more generous with the points. Her overall ranking of Pig's gaits as a 6.5 instead of a 6 demonstrates that right off. Of course, it also turns out that nailing my walk work is an important part of getting my scores in this test.

I like 3-1 because it doesn't start with a medium trot (I think it's the only test like that out there), and that helps us maintain a positive impression with a judge for longer. Our mediums are nonexistent at their worst, and irregular at their best. It's not what I like to lead with.

That said, we set a really great impression with our first centerline. Watching it on the video, I had to congratulate myself. It was super straight, and Pig happily walked into the halt. This is something I've been working on with Pig since last season ended, and I think it's really paying off. Every day we practice stepping into a halt and holding it squarely forward with a positive tension. In the past, we could halt fine, but Pig would rock back or rest a leg once stopped. It was sloppy and led to the second half of our centerline being wiggly and behind the leg. This centerline was great!
I traded off a little more "oomph" in Pig's gaits for some suppleness, which showed in this test. I knew we didn't have quite the difficulty in the half passes or the canter work, so I could push for more go and contain Pig straight. Problems arise when I try to push too much power and maintain flexibility. This means our scores for the half passes were lower, because I didn't have the body bend I needed. However, we did actually show a change of pace in our medium trot in this test.

Our walk work started off interestingly. I am more pleased with our rein back than the judge, as we stepped back willingly and with diagonal pairs. I finally managed to corral the reverse gear appropriately, stopping our retreat at exactly 4 steps, as intended. However, the wild wind whipping around the show grounds made me certain the judge had rung me off course during this movement, so I stopped and had to trot up to ask her what I had done wrong.
The judge was completely confused as to why I stopped, and it quickly became apparent that I had misheard. She was lovely, and let me continue from where I had stopped without an error on my test! Thank goodness!

The rest of the walk work was amazing. We scored an 8 on our first turn on the haunches, which I think is a personal record on that hateful movement. The two turns on the haunches happen to be coefficient scores on this test, which is the biggest reason my score is so high.

The canter work was fairly uneventful. The first change was a little late behind, garnering us a deserved 4. The second change was preceeded by me losing the haunches on the 10m circle, then Pig anticipated the change and we botched the whole thing pretty badly. This momentum carried us into the extension, which I thought was better, but the judge gave a 5. Most likely fully deserved.

Still, we recovered to march our way proudly straight up the centerline and into one of the best halts I've ever ridden for an 8. I am so proud.

I'm embedding the video below. Please try not to laugh too hard as my husband introduces my ride with a bit of superstition involving my black dog and some vomited up grass. He had no way of knowing this ride would be so good, so I am calling it a an extremely prescient intro. Ha!!

I have to say, the comments by the 2nd judge really made my day (beyond having that bronze score on my record!). In case you didn't catch them, I'll close out this post with them... 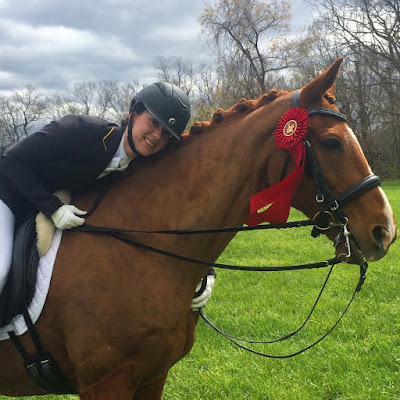