As Aimee recently pointed out, I have not yet shared a photo tour of my astoundingly gorgeous new barn. So, while I enjoyed the hell out of my vacation away from typing and staring at the computer, I agreed it was probably time to get back to work, both blogging and job scouting...

When I left this story last, I was feeling both heartened by our not-failure at 3rd and disappointed by the low score in 2-3. I wasn't sure what to expect on second day of the show. My 3rd test was early in the day, prior to 7am, so I was up early to fix braids and get to the ring.
My warm up was much like my second warm up the day before. Pig was behind my leg and behind my hand. Luckily, I had about 30 minutes before my ride time, so I could quietly get him a little more forward. He never felt "fixed" but he did feel better by the time I got into the ring.

The test itself felt like a mixed bag. It didn't feel as nice as the test the day before, but some of the moments I had struggled with before were much better. Video...

Our entry scored a 7.5, amazingly. His halt was nice. The shoulder-in right scored a 6, with tension being noted. He's clearly against my hand and tight through his topline, though the shoulder-in angle does remain fairly steady. His neck is much too bent, though. He's escaping through the shoulder some. The judge remarked that our half pass left (6.5) showed good bend, but was flat. At least the haunches weren't trailing?

After the left trot work, he seems much better in the contact. He's more through and collected, but the right half pass and shoulder-in scored a 6. I wish the judge had rewarded the outstanding half a 10m circle preceding the half pass, though.

The medium trot is iffy. He slips a little at the start, and despite my best efforts I fall behind the motion. That said, he still opened up his stride and kept pushing. I won't complain about the effort. We got a 5. Nailed it. (ha!)

The halt and rein back scored a 6. I love how he steps into the halt, even if he ends up kind of strung out weirdly. We still don't have those nice diagonal pairs in the rein back, probably because the aid still takes him by surprise. The judge noted the lack of diagonal, also the fact that we took about 1000 steps back instead of exactly 4. Whoops.

I felt the walk work was better than the day before, and the judge agreed. We scored mainly 6s, with a 6.5 thrown in for the first turn on the haunches. Pig's lack of forward discounted us, as did all of his bracing.

Unlike every other test in our life, we did not improve our score markedly in the canter work. The depart and first 10m circle was a 6, everything else was a 5 or below. Ouch. The first change was a serious dolphin moment...
Yeah. We brought home an almighty 3 on that train wreck. Deserved. The second change was an auto, and my holding him caused him to be late in front. Ugh. I hate auto changes. I let him have it because, whatever. That change was a 4. Everything after the first change was incredibly braced. It's obvious that I completely pissed him off with that and he just gave me the big middle finger for the last bit of the ride. He did give me a really good effort in the extended trot, but I failed to stick with him and he doesn't have the topline strength to really support the movement. Again, not his fault and I was happy.

I was pretty sure I had bombed that test completely, remarking to my trainer back at the barn "did you see that? No? Good. No one needed to see that." Only later while I was serving some time as a ring steward did my friend bring me up my test complete with a fancy red ribbon.

Yeah. We got second.

Out a big class. 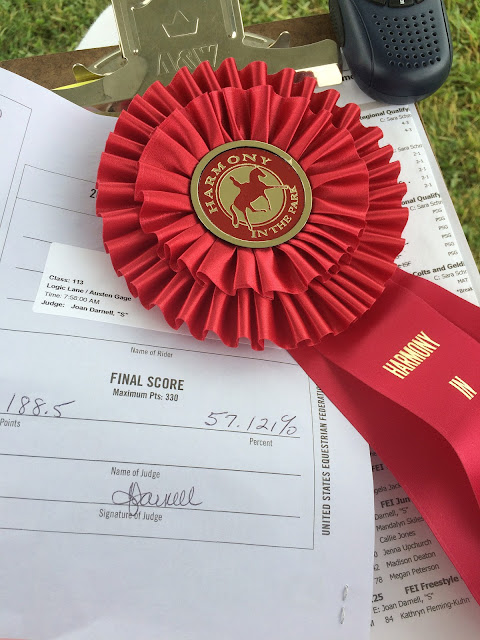 My trainer's reaction? "Take it and run!"