View of the Barn 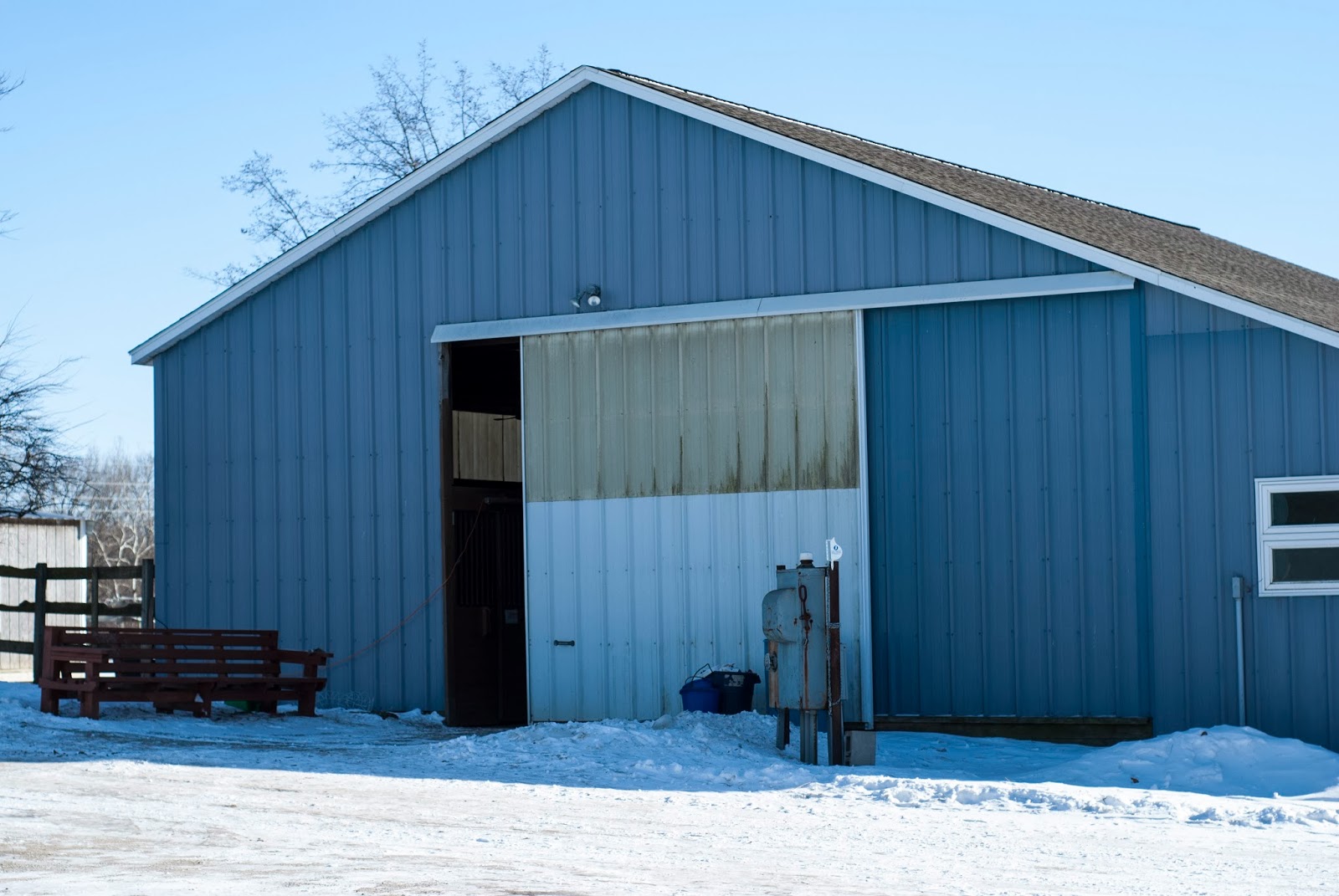 My barn is unique, because it's a pasture board set up. So the barn itself contains a tack room, bathroom, feed area, two cross ties and five large box stalls. During busy days, every stall can be filled with horses being tacked up, both cross ties will be full, and people, dogs and horses will be milling around everywhere. It can get crazy. Luckily, the open layout allows people to flow pretty well. A sliding door at the front, allows for full access to the aisleway. 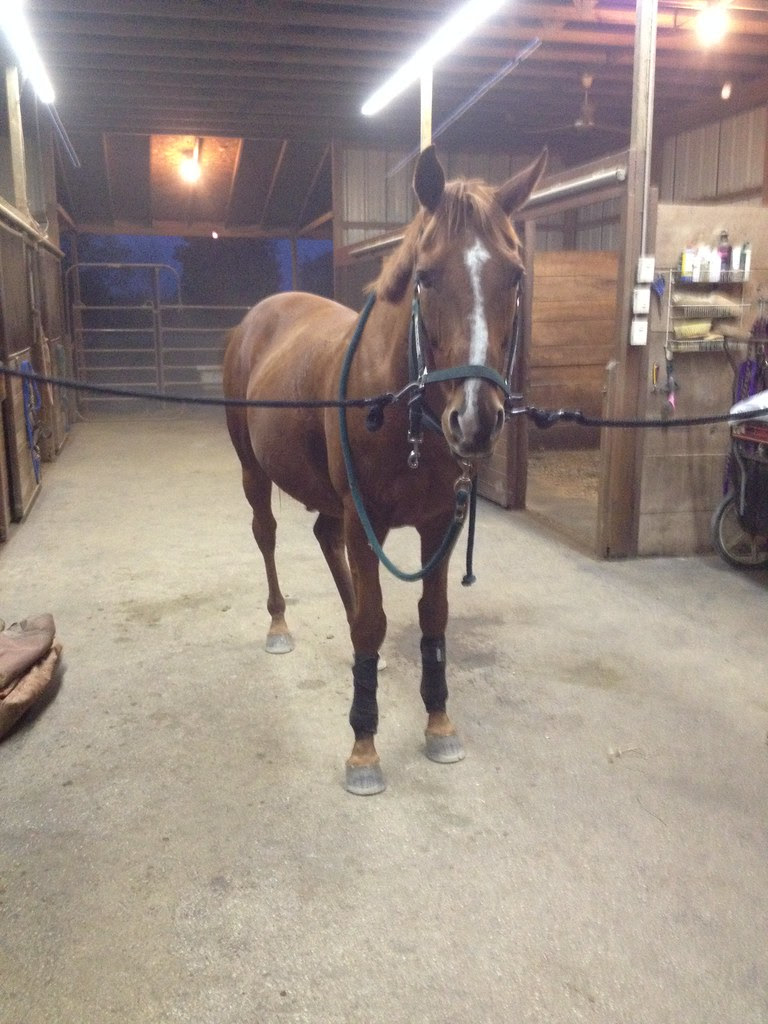 On the back side of the barn is a pasture where most of the school horses are kept. That allows the students and barn owners easy access to their frequently used horses. Some other boarders keep their horses on nighttime stalls. Their horses are brought in at night and fill up most of the barn stalls. Guinness, meanwhile lives on 24/7 turnout, and is only brought in once a day to be fed his individual supplement. 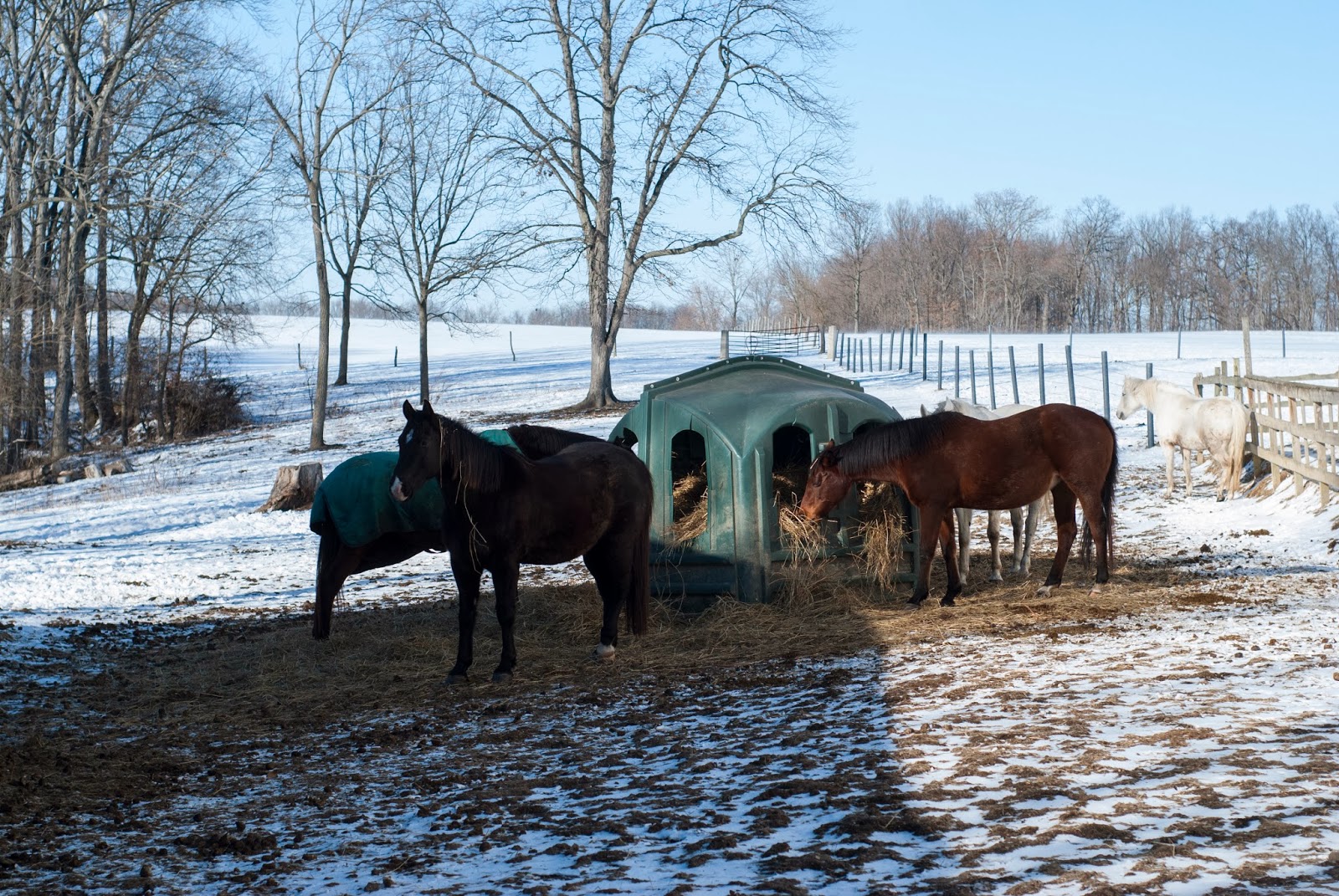 Guinness lives in the biggest pasture on the property. It is mainly comprised of the barn owner's older school horses, and broodmares. The black gelding with the snip in front is an older (navicular-plagued) dressage schoolmaster. He and Guinness take turns being top gelding. The upper pasture is currently closed for the season, leaving the horses full run of the woods to the left of the photo. It's about 15 acres total. In the summer, the horses will be allowed out on the two upper pastures (the big expanses of snow at the top of the photo) on a rotating basis. Each section is about 15 acres of nice grass pasture. In the winter, a round bale is offered 24/7.

The tack room has two big areas. The first is all first aid stuff and school horse tack. The second is boarder and private tack storage. There is a bathroom and office area off the boarder section. The tack room is pretty climate controlled.
My stuff is piled up in the corner. I have plenty of room to keep my things at the barn, but I usually keep my show/spare things at home just to cut down on clutter.

View of Where You Ride
The indoor arena is where I mainly ride in the winter. It's a pretty nice, though small arena. It's just about the size of a regulation dressage arena. That makes practicing movements a little difficult, as I'm always reaching the end of the long wall too quickly. Nevertheless, it's fairly warm in the winter, dry, and pretty cool in the summer. I'll take it.

There is an outdoor arena, but I don't have a good photo of it. It's currently frozen. Here's a photo from last winter showing some of it ...
There is also a little bit of a jump area set up in the pasture next to the outdoor arena. I don't ride there very often.

Trails! I love having so much to explore off property. In the Spring/Summer the neighboring property opens up his trails to riders at my barn. That offers me up to 10 miles of nicely groomed trails ranging from steep hills, to rolling terrain, to flat galloping areas. There's forest, and fields, a bubbling creek and even a lake!


During hunting season the trails are closed, but the roads and fields are safe for riding. The roads are mostly dirt/gravel and really nice for late winter conditioning.