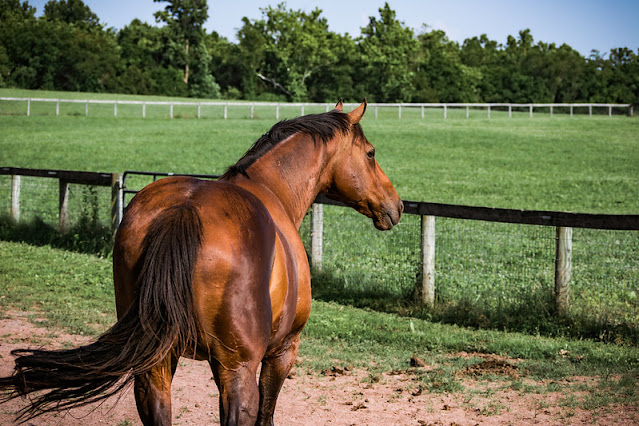 Remember last year when we briefly tried Bast in the same field as his older (and somehow wiser) brother Pig? That situation only lasted a short month, after Bast made it obvious he couldn't live without his new girlfriend (but also, couldn't live with her). His behavior got so bad I declared him dangerous, and he moved back to his old field. I was so upset (and so was he) that I gave him several weeks to sort his life out before starting him back to work.
It was a whole drama. Apparently it didn't scar me too badly, though. See, last week we decided to move Bast back in with Pig. This is starting to feel like an annual event. (Let's hope it sticks this time.)
The mare has since moved off the property, and two spots opened up in the back field. Bast and the boss horse from his group in the front field both moved down together. We figured a group of mostly retired horses would be a good bunch of role models for my youngster. (Omg, Bast you're EIGHT. Get your emotional life together, brah.)
The intro went surprisingly well. We turned the boss of the other field out with Pig and his best old man friend first. Pig was excited to meet a new friend, but really protective of his old buddy. That only continued when we turned Bast into the group. Except for Pig running the two newcomers away from his friend, things were completely calm. I'm sure the fact that it was a real-feel of 103F with sticky humidity helped keep things quiet.
Eventually, Pig decided things were too cramped down by the shed, and he herded his bud up towards the grass. Bast and the boss followed at speed.
Pig wanted nothing to do with Bast near his friend, and made sure to let him know it. Bast didn't seem too offended, veering off at a gallop to show his boss friend the back half of the pasture.
Pig and his friend stayed in the middle part of the field most of the afternoon. Every once in awhile Pig would prance around so everyone knew he was really manly and scary. Then things would go quiet with that pair. For the most part, they were settled in nicely. The other two really left them alone.
Meanwhile, Bast and his friend zoomed back and forth between the pasture and the shed. First coming down the lane at a breakneck speed...
Then zooming right back out again ...
As my barn manager remarked, this group really made it clear how much the thoroughbreds (and horses in general, really) like to run. They really seemed to just be enjoying themselves.
Finally the heat set in and the adrenaline ran out. The boys relaxed and started exploring the area around the shed. They also took time to meet the neighbor horses getting turned out next door, and just relax with each other.
I left after dark that night, and things had remained calm the rest of the evening. Not a peep was heard from the field, and all the horses were cool and grazing happily in pairs when I pulled out. I went home feeling optimistic about the really smooth introduction.
Labels: new pasture