Robert Dover Clinic Write Up: Inside Flex, Outside Half Halt 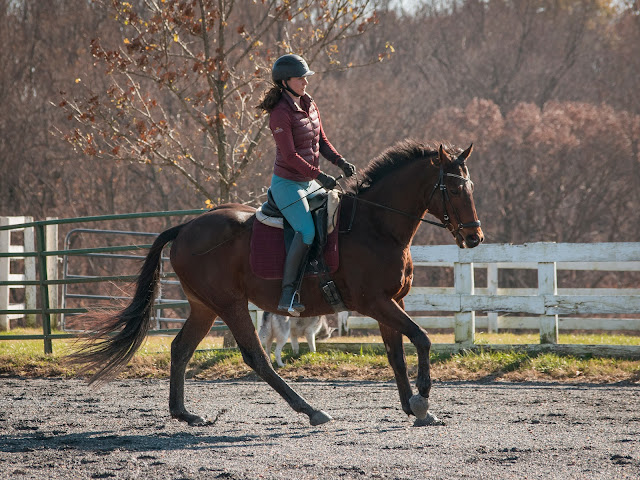 I've been obsessively watching the Robert Dover Horsemastership Clinic on USEF Network this week. Dover is such a positive trainer, and I love how much value he places on praising and rewarding the horse. That's a lesson I am always trying to internalize, especially with Bast's more sensitive temperament.
During every lesson, Dover has been emphasizing something he refers to as the "rubber band" concept. He explains this as the feeling of an extended trot existing within your collected trot, and visa versa. With every horse and rider combo he came down hard on any half halt that backed the horse off. ("The half halt shouldn't back him off, it should just put more energy into his collection.")

This is a lesson I think every horse needs to really internalize, and every rider needs to find comfortable. The impulsion of an extended trot sitting within a collected trot can feel ... downright explosive. In a young horse especially it can be a bit too much to keep under control. That's where the training comes in.
In every ride, I need to put more forward in back into each gait. I need to continually remind Bast not to get comfortable at one speed, and to always be ready to rev his hind end engine faster. We tend to get stuck in a "nice" trot. Or a "relaxed" canter. Or a "soft" walk. Relaxation is awesome, but relaxation in movement is the cornerstone of dressage training. I need to find the relaxation, then bring it into the forward and back work.

This sort of training will allow Bast to become more responsive to my leg, without being over-reactive. It will also teach him more acceptance of the hand aids overall. He struggles with both concepts, as many young horses do. This can only help him, and I need to keep it top of mind. My trainer and I have worked on this sort of thing in the past, so I am totally set up to add in more of this right now.
One of the other lessons Dover stressed, was the use of each rein. One rein to supple and one rein to half halt. Again, this is a simple concept I know and have heard and worked on before, but one where I seem to have selective amnesia.
Dover would constantly ask a rider to half halt off one rein or another. Usually this rein corresponded to the rein the horse was either backed off on (inside or outside) or the hind leg that was lagging behind. Then he would ask the rider to flex the horse with the other rein, to keep them supple. This, of course, was backed up by the riders body and leg forward and suppling aids.

This is a concept that works very well with Bast. He tends to be very inconsistent on one rein or another, while I allow him to escape, half halting and flexing off the one rein he'll touch. Big mistake. I need to be more accountable here, and demand he come up into the half halting rein and ask him to drop into the contact with the supple rein. Riding like this exposes all of the holes in his training, which is exactly what I want at this point in his training. We've gotta get those filled before we can ask for more!
Other things Dover stressed?
- The clarity of a rider's aids, both on and off. He wanted to see riders clearly praise their horses as well as clearly get after them when the rider was ignored.
- The vision of the rider. He demanded that each rider think positively about their riding and find their confidence. He demanded they be realistic about their position, and held them to changes he wanted to see. However, he emphasized how visualization and belief you could do a thing (extended trot, 21 flying changes, trotting by something scary) were important to make a thing possible. Often he would say things to a rider like "think extended trot" instead of "ask for extended trot". The mental game is huge.
- "I don't love when people say 'rock them back.'" Because you don't want them to slow down. You want them to speed up behind instead.
- Don't reach for your stirrups. You should be able to have your stirrups supporting you, not reaching for them. The ability to put your heel down, but not shoot your leg forward was important.
- End a lesson when the horse gives you good work, and don't make them sour bringing them out the next day to drill something they don't need to drill. A student was schooling excellent Grand Prix work, and Robert suggested she actually not come back for the next day of the clinic. Instead he said the horse would benefit more from an easy day at home more. It's not often you see a trainer suggesting a rider not lesson with them.
- Don't lean back when you want to drive the horse forward. Instead lean forward. Leaning back is against the forward motion.
- Finding and using stability in the upper body to recycle the horse's energy. He reworked several rider's positions in their upper body, putting emphasis on the arms being close to the body and the back being straight and strong. I definitely struggle here, so you can be sure I was paying attention.
Anyone else watching these videos? They're available for anyone with a USEF membership (fan memberships are available with a promo code quite often!), and completely worth your time. Robert Dover is such an incredible lecturer, able to translate training ideas into common language. Even concepts for Grand Prix horses are applicable to the training level horse. Plus, the man is just so damn perky and positive. Don't we all need a little more of that in our life?