The Saturday of PVDA Spring was a reminder of how difficult being a competitive adult amateur can be. I woke early, not to get to the show grounds, but to pick up nine cardboard containers of Dunkin' Donuts coffee for a work event... yeah, I had to work an event the same day as my show.
Thankfully the show manager had been able to work with my schedule, and place my single 3-1 ride at the end of the day. Also thankfully, I survived my work speech and made it out of the meeting just in time. I pulled into Morven with just enough time to change, braid, and tack up. Though, the show volunteers did get a bit of a laugh when I stopped to check in while wearing office-wear...
Once I was changed and Pig braided, we went for a quick jog around the section of cross country by the barns... in-hand... as has become our usual warm up. I've found the in-hand jog to be be very helpful in loosening Pig out of his stall stiffness, without putting any pressure on him. This is also a great way for me to get my brain focused on the job ahead.
Unfortunately, the rain from earlier hadn't quit. As anyone who watched the Preakness (only an hour and a half from the show facility) would know, it was a horribly sloppy day out there.

I was thankful, as I tacked up, that Pig is good in adverse weather conditions. I may have joked with my fellow competitors that I seem to be very good at bringing terrible weather with me to Morven. Last time it was sideways snow, this time sideways rain. Some people asked what my next scheduled show was, in order to avoid whatever awful precipitation I would bring with me! That said, Saturday's rain ended up being the lightest of the whole weekend.

Of course, whether it was raining or not was besides the point. As I mentioned the other day, the footing was already a completely sloppy mess. The base was stable, but there were inches of rain in spots, making all horses nervous. While good in adverse conditions, Pig isn't great in overly sloppy footing. His sensitive thoroughbred skin takes offense to splashes of mud and grit, which leads to some wild leaping and bouncier steps.
In the warm up, I focused getting Pig forward despite the muck. I also tried to establish enough relaxation to keep his rhythm clear enough. We've been struggling with canter rhythm at home. Though I've managed to get it cleaned up pretty well, with the slop the rhythm was totally off. Pig was catching legs in the muck and breaking behind (not normal), or breaking his three beats into four (our normal issue).

The ring was running ahead, so when I felt I had him fairly relaxed, in rhythm, and on my aids, we headed in. Watching the test now, I feel that an additional 10 minutes of warm up could have made for a better test. Still, I made the best decision I felt I could.

The first centerline was a little wiggly. Guinness had been a little uncertain about the judge, and a little backed off the contact. That made a good centerline really tough to ride. That wiggly-ness would pervade the rest of the ride.

I felt the left shoulder in was better than the right, as Pig was more on my aids. To the right he wanted to fall out with his shoulder, and so I had to really ride the snot out of him to keep him near the rail. Both half passes were just okay. The half passes in 3-1 are incredibly shallow. That makes them really tough for me to ride. With a horse that struggles with half pass, I bet they are great. For us, I have to keep riding straight to make the whole length. It's harder for me to keep Pig engaged in the movement. He wants to step under too much at my aid and rocket us to to the wall. I can't get too much collection here, for accuracy sake. That lead to comments about crossing and bend being unclear, which I completely agree with. 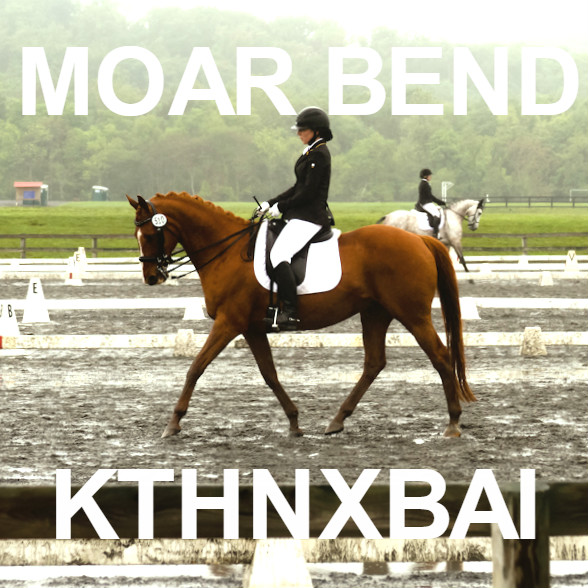 I thought our medium trot was better than it has been, though the transition felt a little stiff to me. Pig was too backed off the bridle and weirded out by the footing maintain his roundness into the downward.
The judge liked our medium walk more than anything else (the only 7) in the test, though I would have called it a bit tense. I thought our turns on the haunches were fairly submissive, but needed a bit more sit. They were wider than normal, but still good enough for 6s. The second TOH was a bit stickier than the first.
The free walk felt fantastic, but for a few tense steps in the middle when I tried to ask for even more overstep. That slight jig knocked down our score to a 6.5, dammit. Still, hard to be upset with a walk nice enough to feel the back sway.
I flubbed the right lead canter depart, and we ended up with a sloppy transition through the trot. The footing made my mistake stand out even more. That tension followed us through the puddles along the side of the ring, making the medium canter hilariously dramatic in the hind end. Pig's tension also caused me to lose hold on the tempo. Our canter was a bit four-beat in places, and the transitions were a bit awkward because of that tension too.
The other direction, we lost our footing by C and had a few steps of trot behind. The extended canter was even more "bouncy" than the medium, though it felt a little more through. Plus, the downward transition was a little more prompt. Again, I lost the canter behind for a step on the 10m circle. I don't really know there was anything else I could have done to maintain it, though. I was dancing a pretty narrow line between submission and complete mental throw down, due to the footing. I tried to just be supportive, without putting on too much pressure.

Though I expected lower scores due to the tempo issues, the canter work was solid 6s, except for the changes. Both changes were a fraction late behind for a 5.
I was happy with the first change. Though late, it was quiet and on the aid.
The second change was quite a bit more stilted, with Pig nearly coming to a stop before launching into the last bit of it. 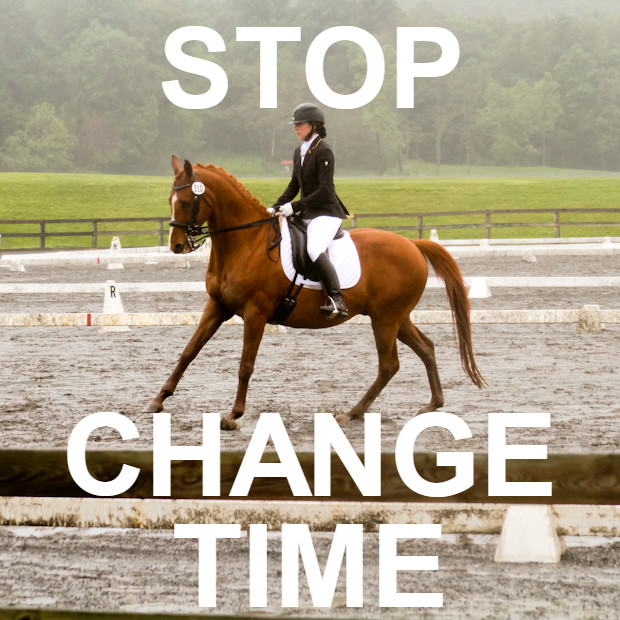 We pulled our lives together to do the final extended trot which must have looked better than the initial medium trot, as it got the same score. I thought it felt a little more connected, though the downward was a bit tough to get. I seemed to have forgotten to sit on my horse for the transition, turns out that's an important part of the downward aid.
Our last centerline felt straighter, but I couldn't hold Pig's attention in the halt. What started fairly square fell apart as he lost his balance and craned his head to stare off towards the road. That was frustrating, but overall not a huge concern for me. We are capable of good halts, but they are not somewhere to put pressure on.

I was quite pleased with the collective scores, especially the 7s for gaits and rider position. I agreed with the judge that Pig and I weren't communicating the best in this test. He wasn't confident in the footing, so I wasn't sitting the best. Plus he was backed off the contact. I don't think the footing was allowing him to be forward enough for the double to be useful. I really never felt that I needed to use the curb. If I'd had another test on Saturday, I'd have tried the snaffle to see if we had better results.


Jan assured me that the test didn't look as bad as it felt, and she was sure we had gotten our last needed 60% for my bronze medal. Turns out, Jan is a pretty good score predictor. We ended up scoring a 60.455%, which did finish out my bronze medal! As everyone else in our class scratched, we ended up with a lovely blue ribbon and our pick of the prizes. Our score was right along those in the 3-1 Open class, so I didn't feel the "win" was completely undeserved. Plus, the satin and prizes felt like a good celebration for finishing up my Bronze.
As I'd decided prior, I asked the office about switching one of my 3rd level rides to 2nd on Sunday. After reviewing the tests, I decided 2-2 or 2-1 would be the best options, as those tests had the least opportunities for us to have counter canter failure. Unfortunately, 2-2 was full, but a scratch in 2-1 left me a slot to try to finish up my Rider Performance Award at second level on Sunday.

I bedded in Pig for the night and shared a glass of celebratory wine., Then, I headed home, happy in the knowledge that I had accomplished my intended goals against the odds on a long stressful day. Does anything help you sleep better?