I've been working on a post about our show last weekend for awhile. As per usual, all of the life I put on hold to prepare for the show has come crashing down on me in the week after. I promise I'll have the write up soon, and it's a seriously great one, so check back soon. In the meantime, I want to reflect for a minute.

This morning Facebook reminded me that 5 years ago today I was crying uncontrollably in my car, holding a set of horrible fetlock x-rays.
My vet had described what we had found as "significantly advanced degenerative joint disease of the fetlock," on top of other scarred tissues, possible bone chips, and other old injuries.

I was devastated.
It was clear that Pig would never jump again. Our eventing career was over before it ever truly began. We weren't sure how sound he would be for flatwork. The vet cautioned me with a phrase that has echoed through my head ever since...


"This horse will do anything for you. It's obvious how much he enjoys working for you. Keep riding him. Don't let him sit. If he wants to do it for you, let him. He'll tell you what he can and can't do. It's your job to make sure he keeps moving, so he doesn't lose what little mobility he has left."


At the time, I didn't know what that would mean. I assumed that Pig's career (as little as existed) was completely over. I knew I couldn't afford a new horse, and he couldn't be rehomed until I knew how to manage him. Sobbing in my car five years ago, I made the decision to stick with him until we could figure out whether he was really done.
Knowing the damage was already mostly done, we decided to treat him for pain only. A round of hyaluronan and corticosteroids was administered almost immediately. I started experimenting with feed through supplements containing USDF illegal herbal anti-inflammatory. Words like MSM, boswellia, and devil's claw entered my daily lexicon.
I dove into arthritis treatment research headlong, and after a while began to mine my husband's med school studies for more information on effective treatments. Still, we were on a budget. I couldn't afford to inject all the time. Adequan was out of my budget. Pig's history of ulcers meant I didn't administer bute unless he was exhibiting extreme pain, which was rare.
We kept off his shoes to keep weight stress off the fetlocks. We walked, a lot, and mostly in-hand to start. Then we walked on the roads. After a few months we moved states, and Pig moved to a lush 24/7 turnout. Things started looking up.
The vet had mentioned fetlocks sometimes fuse. He'd said it with a note of warning, though. "Sometimes fetlocks fuse in a bad way, and the horse can't move fluidly. Sometimes the fusing is painful, or not solid. Sometimes they don't fuse at all. But, fusing is your best chance of having a rideable horse someday."

After awhile, I noticed Pig's soreness was decreasing in the summers and winters. His hitchy warm-ups were starting to decrease in length, and he was playing more in the pasture.
We started playing more seriously with training, going to shows and starting to lesson with an awesome "local" trainer. I told my new trainer that I wanted to get my Bronze Medal on this horse, if I could.

If he would last that long.
With my trainer, the focus was always on me not Pig. Anything I asked correctly, he was willing to do. He wasn't fancy, but we were more concerned with correct basics. I started to forget about his arthritis most days. By 2013, I had stopped his supplements and his injections. He simply didn't need them.
Other injuries started taking precedence. When Pig would feel off, my mind started to flit to other possibilities first (abscess? bone bruise? muscle strain? riding crooked?). We had developed a feel for the arthritis, and the warm ups required to smooth things out.

We debuted at a USDF show, at first level. With no drugs in our system, and no recent injections, we trotted down the centerline. We weren't great, but it wasn't because of painful fetlocks.
The winter of 2013 we moved up to second level, and the work got harder. Pig didn't complain. His legs were tighter than ever. I had gotten so used to Pig's soundness, that I was taken by surprise in the spring when his fetlocks would flare up a bit. But, a few days of bute was all that was needed to get him through the tough week. We never had to go back to injections or supplements for the fetlocks. We showed, sometimes successfully too.
We also just enjoyed relaxing. We went on madcap galloping adventures with friends.
And went hacking out "alone"...
We've won fancy ribbons...
And miraculously survived horrifying accidents...
And learned to do dressage changes...
We've won ribbons at third level, though we didn't get our scores...
We've moved across the country...
And moved into a palace...
And trained with different trainers...
This horse is amazing. He's never once said "stop". He's never told me that he is done. He's never asked to quit. I think back to what our diagnosing vet told me, and I am amazed further at the heart of this horse.
So now I am torn. This horse has done all I have asked of him, but his aging and abused body isn't keeping up with his will and his heart. How much can I continue to ask him going forward? At the same time, is retirement really fair to him? Is it a death sentence to take regular work away from this creature, when it has saved his life thus far? Can I expect someone else to understand his limitations, forge a bond with him, and keep him moving at a level he is comfortable with? Can I let him go?
I don't know the answers to those questions... yet. But I do know that this horse is my inspiration. He is an embodiment of the heart of the horse and determination of his breed. I am so lucky to have him in my life, and share in his joy in living and doing. 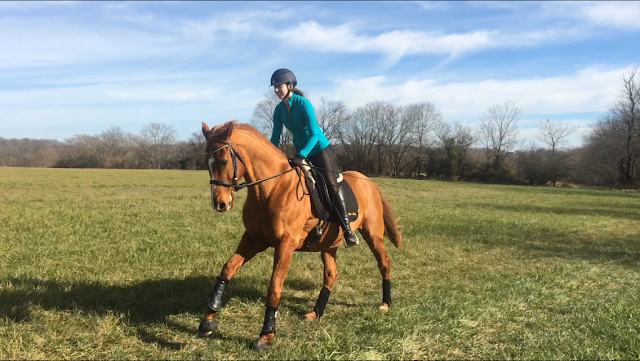