If it isn't one thing, it's another.

This week has just been a catastrophe of scheduling conflicts, busy days and mysteriously swollen legs. It's been so crazy all I've wanted to do is come home and die at night (and pretty much, that's exactly what I have been doing!). For the most part, we've all been doing fine ... but for the scare with Guinness' leg.

Last Tuesday after pulling the big man out of the field, I noticed some blood on his little white coronet. I fished around in his long wet hair, but couldn't find a wound. Finally, I concluded that his injury was probably due to the chapped skin of his coronet area splitting, sprayed some antibacterial stuff on it, covered his coronets with Corona and called it a day. Unfortunately, I had missed the real issue.

Thursday I found him with a swollen back leg, stemming from a hot laceration halfway between his hock and fetlock and sitting directly over the tendon. Fabulous. He wasn't lame at all, and cold-hosing seemed to have no effect. I cleaned his leg as well as possible, sprayed it with antiseptic and we went for a light ride. After the ride? Clean and cool legs prevailed.

Friday evening he again had horrid swelling and his feet were even hot. It was clear he had not been outside since, as his legs weren't muddy (oh! the mud!). I started flipping out immediately, calling people and being a general nuisance. 10 min of cold hose followed by 10 min of walking rinse and repeat lessened the swelling by half, and I wrapped his back legs and covered him with a light sheet. 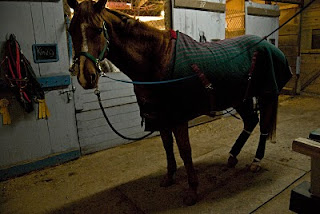 But Mom, I HATE wraps and blankets! Gross.
Saturday morning, less swelling. We walked around a bit, cleaned his wound and redressed - sending him outside to walk around the rest of the day. That evening the swelling was down again. I wrapped his legs again and set him in his stall again. This morning everything looked fabulous under his wraps and he was still sound, so we hacked out.

Man, I love this horse! He was definitely feeling his couple of days off, but kept his head around him. He has the ability to feel like a basket case while staying relatively easy to sit. I think it's how he can toss his head, and his neck can totally disappear. He doesn't buck (ever, really), but does have a tendency to just bounce in place when excited. There was lots of that today.
The ground was pretty nasty. Twenty-odd inches of melted snow can do that do your field. He was slow moving over the really gross stuff, but we slogged through all of it, worked on collecting and trotted up lots of hills to work on condition. Even with the temps hovering around 50, he stayed relatively cool. I'm so proud! My little eventer is getting so brave!

My fellow boarder went out with me. Her cowhorse-trained Quarter is such an adorable dressage horse in training. I couldn't stop watching them! Of course, he's a little small for my tall friend, so she's looking for something a little larger to learn to jump on. Here's his Craigslist ad. He's super cute, and just needs someone to put the jump training on him. With that and a few more miles, he would make a cute pony clubber mount for C1 and below. Easy Peasy.

Meanwhile, the barn search is underway. I've looked everywhere near me. It's difficult, as the boarding prices are exorbitant in this area. I'm still waiting on a few places to get back to me. My notice isn't in yet (don't want my B/O stop feeding my horse altogether once she learns i'm leaving!). I'm hoping to have him moved in the next 30 days. 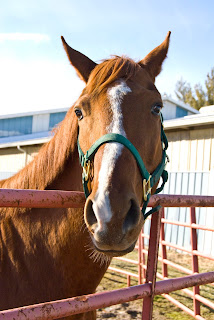 Get me out of here!

As for me personally? I'm struggling with the thought of entering the Cincinnati Flying Pig Half Marathon. Billed as one of the most fun large running events, I can't really resist. The Cincinnati/Northern KY Apartment Association is doing a charity sponsor group - and they want me. I need sponsors, though. What do you guys think? Should I sign up? Anyone want to donate to watch me run?
Labels: hack Injuries new barn sore feet stocking up thoroughbred trail rides turnout