Anger, or How I Lost Trust in My Barn Manager

Sometimes, I hate learning I'm right about something. Let me fill you in ...
We all know how I have been struggling a bit with Guinness' weight. How he's been yo-yo-ing worse than Oprah Winfrey. How his coat's been dull. How a million other little signals that he's not 100% have been driving me CRAZY! Yes, yes? We're all on the same page right? Good, because yesterday I found out why. Ready?
My Barn Manager has been switching his feed. Repeatedly. Without telling me.
Reducing, changing, adding, removing - if you can do it horse feed, she's been doing it. This is a HUGE no-no in my book. Especially with a horse who suddenly has weight problems and arthritis and bad feet. Especially since she hasn't felt the need to share any of this with me. Here I've been pulling out my hair and feeling like a terrible owner, and she's been changing up his feed about every three days!
I could KILL her!
When I moved to the barn, I thought my barn manager was a little flaky and a little backyard breeder-ish. All the horses looked good, so I thought I'd give the place a try. I'm should have kept those misgivings a little more in mind, because I wanted him on as little grain as he needed to hold his weight (he was in perfect weight), and as much hay as I could feed him. She put him on 3 flakes of hay twice a day, and a scoop of a low-starch complete feed twice a day. Plus turnout. She promised round bales all winter. When he started losing weight, I added corn oil to see if that helped. Turns out, they added Pig Feed instead.
OMFG! PIG FEED!
Okay, that I caught early and told her to "Never, EVER, feed that to my horse again." I thought I had taken care of the feed issues with that. Nope. Apparently she stopped feeding oil, and while giving me miscellaneous vet advice about how to get my horse to gain weight, switching him from a good 12% low starch to sweet feed (probably because she ran out of the other!). Then, I asked her to add beet pulp, which she did. For two days. TWO WHOLE DAYS! Seriously? She explained herself yestday by saying "he was throwing it all around, I don't think he likes it." Really? She'd told me that she wasn't sure if he liked it after he was on it for one day. I told her we'd stick with it for awhile longer to see how he did with it. One day is not "awhile longer". Furthermore, why did she take him off of it without me telling her?

His hay portions are another matter. He's been dropped from 3 flakes to 2 per feeding. Okay. At this point it just seems like one more thing to bring up. How many times can I say, "Just tell me before you have to change anything!".
So now, my horse has been on 12%, oil, pig feed (!!!!!), sweet feed, beet pulp, and now (as of last night) Purina 200. In addition, when I asked about my supplement supplies, she told me that has about another months worth of my SmartPaks. Um? What? I should be just about out of SmartPaks, as my March order has already shipped. SmartPaks doesn't screw up - so these have not been fed either. Great.
Now, I still feel like a horrid horse owner, but now for a different reason. I should have caught this catastrophe earlier, and paid much closer attention to how my horse was cared for. I also should have followed my gut instinct and not trusted my barn manager. Moving Guinness is something I am looking into really seriously right now. There's another barn nearer to my house that I wouldn't mind trying. The board is a little more, but he'd be closer and easier to keep an eye on. I guess I have phone calls to make.

In other news, our riding has been going fabulously! Even with the snow/mush that's out there right now, we're getting to hack out at least twice, and typically 3 times a week. It's slow walking work, but he's out of shape and it's a good way to work on that condition. After reading this lovely post from Andrea, I decided to try dropping Guinness' bit to see if he would stop fussing so much. And, you know, he's really doing better at accepting contact. Part of his fussing is from being bored/nervous, and that's not going to go away but with more engaging work. But the part that was just generally fussy has stopped, for the most part. Whoo!

Now, gotta run to check whether Guinea's evening feed has been made properly! 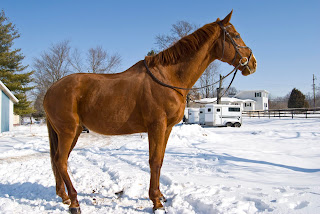 Guinness says: "If you feed me what you're supposed to, I wouldn't look like my topline DIED!"