Working hard, in the snow! 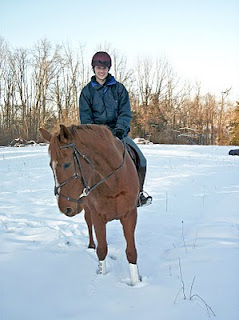 In case you haven't heard, Ohio was a part of that "massive snowstorm" that hit the east coast this past week. As an avid snow lover, I have to say that this snow did not in any way cramp my style. Snow outside means a happy and bouncy Austen as she gets excited to go out an play in it. Luckily, I found a great excuse to go outside in the form of my furry four legged pony!

Speaking of Guinness, he's looking great on his feet (no signs of soreness!) and the slight problem we were having with his legs filling up was solved by a couple of days of stable bandages. Viola. He's been just wonderful to ride ... though I'm sure I'm tempting fate by posting that! Unfortunately, once the snow hit, his already limited turnout was really cut down due to his pasture friend's shoes. As the other ponies were compromised and prone to slipping, he got to go out all alone in the round pen ... he promptly complained loudly about being left alone and turned his butt to the door the entire time he was made to stay out there. I feel bad about him being unable to wander around, but I know he wouldn't go far alone anyway.

Of course, he has been getting plenty of snow play himself! On Wednesday when the snow started to fall, Christian and I grabbed our stuff and headed to the barn immediately after work. I managed to convince my barn manager to let us use one of her old Tennessee Walker geldings for Christian and I to go for a nighttime snow ride! We tacked up Shaker and Guinness and warmed up in the indoor, then headed out to the pasture for 20 minutes of tramping through a winter wonderland of fun. Both horses were extremely well behaved, though full of energy. Shaker was reluctant to leave the barn, and Christian learned quite a bit about turning a mouth-dead stubborn horse. Guinness, meanwhile, was brave enough to walk on his own and not even spook at the cars going by on the road. I was so proud of him. It was just what we needed to get back into the swing of things. 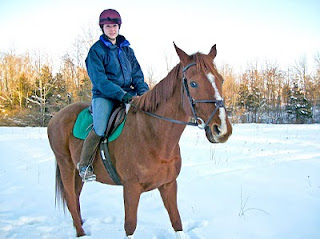 Later in the week we did some more trot work, focusing on my position (which has seriously deteriorated, can we say 'needs lessons'?) and taking a light contact. Forward as become the name of the game for us, and the Pig has been happy to oblige. 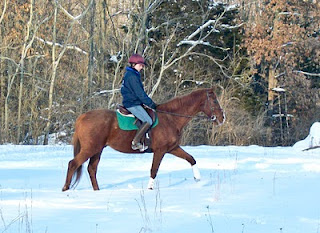 Look at that high stepping! Daisy cutting is impossible in deep snow, which is why I feel it's a low stress way to add strengthening to your conditioning rides. Plus, it's way fun!

Yesterday, the whole gang headed back out to the barn for some more snow fun. Which Christian and Sonka played in the snow (and took these pictures!), Guinness and I worked on relaxing outside and moving forward and lightly. I think it was very productive. My normally spooky and tense horse was sighing and chewing the bit properly (not eating it!). I'm still deciding whether or not he was being good because he was afraid he was going to die if he tried to run off in the snow, or if all the work on the ground we did while he was recovering is paying off. Either way, the big guy has given me some fabulous rides, and I am LOVING it! 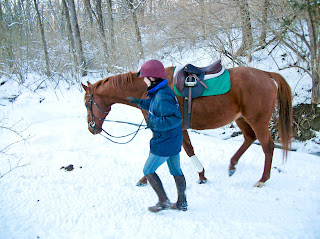 In order to get to our back fields/trails, you have to cross a small creek. Due to warm weather, it was the only thing not covered in snow. Guinness has taken to taking a leap to God to cross the thing, thus the dismount and the big pats. Walking through water, our time will come!

Another little awesome note, you might notice my new saddle in these photos. It's an amazing Craigslist find. The saddle is a Philippe Fontaine Renee, and is in absolutely stellar condition. The woman I bought it from had only had it for a year, and it looks like it's only been ridden in a couple of times.
I was looking for something pretty specific when I was saddle shopping, and I'm really glad I found it. I already have two saddles, but neither really fit Guinness well. I know saddle fit can go a long way into helping a horse with behavior and cooperation, and it was super important to find one that would cover his high withers and still leave room for his massive shoulders. He seems very happy in the saddle, and I have a better feeling of security in it. After riding in older saddles my whole life, having one this grippy and nice is an amazing change! What do you think? 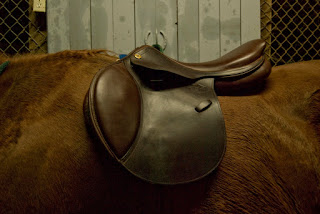 Today, I plan to get us back out in the snow. Whatever good karma keeps giving us good weather, and good terrain to do some easy conditioning on Guinness' back and legs needs to be taken advantage of. Now that we appear to have his feet put back together and healing some, I feel confident putting together a training plan we can stick to. I still want to be able to hit some local jumper shows and maybe a local Horse Trial. How much fun would that be? 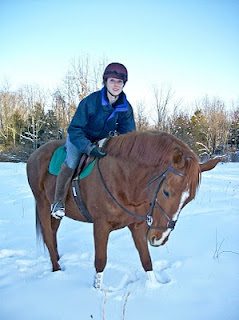