Barefoot in the Sand, or How Keratex Saved Our Lives!

Let me preface this by saying that I'm not a rabid supporter of anything (accept red wine and awkward interpretations of Shakespeare). I mean, I'm probably closer to a rabid non-supporter of most things. Fad Dieting? That's retarded. Biking instead of driving? Well, I love biking - and when possible I will bike instead of drive. But in America, that's almost impossible. Gay Marriage? Okay, that I do support. But anyway, I want you to understand that my work to transition my horse to barefoot doesn't stem from a crazy idea that he was "born to be barefoot". Instead, here's the story.

When Guinness came to me he was shod all-round. He had badly hewn wedge pads propping up his crushed heels in the front, and his back shoes were contracting his heels so badly they were pinching his frogs! It was a gross mess just asking for a nasty case of thrush and an angry bucking fit from a horse in pain. His previous owner informed me that he had been shod since she had known him. Since he had come to her from directly off the track, I assume he's had shoes on all four feet for at least 9 years! The poor guy had a reputation for pulling shoes (and with his swinging walk and poor hoof wall, I can understand how!), and a pair of raggety bell boots came with him to the new farm. Needless to say, blindly shoeing him was not something I could do and still have a concience. 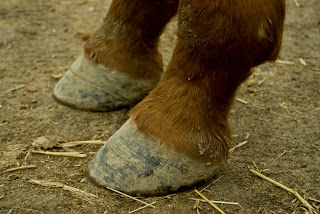 These are Guinness' front feet as of this week, just after being trimmed up in the toe. The line across his front right is from a previous abscess being cut out. Note the heel. 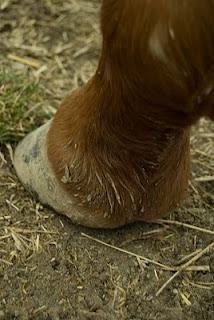 Another shot of his heel on his front left. 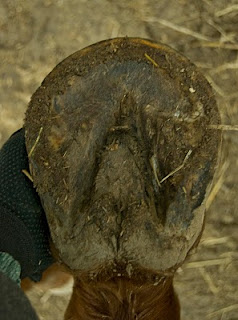 Here's a shot of his front left from below. Please excuse the mud. Though it's difficult to see, his foot is starting to widen a bit, and finally come into some sort of shape. The new heel growth is starting to grow down as well.

Fast forward to the week before Christmas, and I'm meeting my new farrier. He pulls Guinness' shoes and marvels at how sturdy his feet are under all that mess. We agree to leave the shoes off and see how his heels do. The farrier warns me that my horse will be sore on his feet. These words do not prepare me for what follows.

The next day, I get a message from a barn worker asking if I have any bute. It's a cryptic message, and I ask why. She says that my horse looks like he is in terrible pain, and could use some meds to take the edge off. I immediately fly to the barn after work to find my horse standing in his stall (where he has been since being brought in the night before). His arthritic front ankles are swollen even beyond his normal windpuffs, and he looks awful. When I try to coax him to move, he plants himself and refuses to pick up his feet. I pick out his feet in his stall, having to really convince him to pick each one up. Oddly, his back feet are more tender than his fronts. 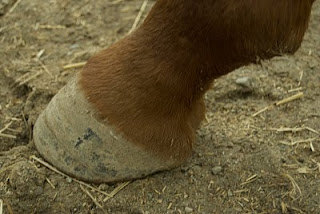 A view of Guinness' back right hoof. Here his abscess line is almost grown out. It's about an inch from the bottom of his wall. His feet are growing so fast! 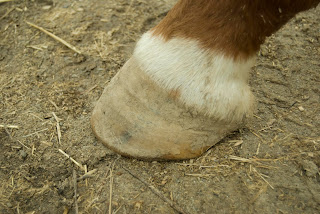 Guinness' back left. Again, another abscess line can be seen (under the dirt, sorry!). His heels are better on his hinds, probably due to not being wedged up with support and allowed to grow down. 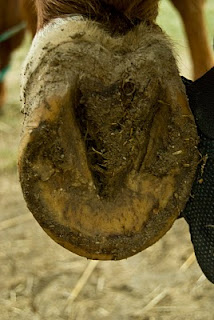 Here's a shot of his back left from below. His heels are still contracted some, but look about 9,000 times better than they did when his shoes were pulling them in to pinch at his frog! It's also a little easier to see his nice hefty sole here. Thank you Keratex!

After lots of coaxing (and about three whole candy canes), we get Guinness out of his stall and into the aisleway. After discovering that the sand arena is too hard on his feet, we walk up and down the concrete aisleways for over 30 minutes. He walks a little better, but still nearly stumbles with every step. I go home feeling like I've killed my horse.

This story repeats every day for the next week. There's always a little heat and pulse in his feet after we walk, which worries me even more. As the days go by, he gets a little easier to get in and out of his stall and he walks a little more surely - but not without pain. I bribe the barn workers to spend the time to coax him out to the field, where he spends days befriending a fat lazy Arab. Life is okay, but I still feel terrible.

The first part of January sees us taking family walks through the woods. With Christian and Sonka (our husky-mix), I handwalk Guinness on wandering tours through snow covered wood paths behind the barn for hours at a time. He starts to gain confidence, not only in his feet, but in me. I also come down with the death plauge. Walking him is just about as much as I can manage. Things are looking up.

Just after our vet visit, we start lunging a bit in the arena as a preface to getting back into shape. Guinness looks mildly lame, but works out of it after warming up. I start thinking the slight lameness I've been seeing recently is more associated with his arthritis and being cooped up in the cold weather than with his feet. Lack of movement = sore joints. Finally, I break down and buy a bottle of Keratex. After using it every day for a week, it's been a miracle! No more tender steps on his feet, and now I become sure that the slight off-ness in the start of work is arthritis. That's easier to deal with, and a lot easier on my mind. Long warmups? I can deal with. Unknown pain from the foot, makes me toss and turn in my sleep!

Last week we started a light conditioning routine. I'm back riding, and it feels SO GOOD. He's very short strided for the first twenty minutes of our walking warm up and his first few turns at the trot are awkward and trippy. After he gets warm, he's much better- long striding and swinging at the walk and the trot, though still tripping a little. Unfortunately, just as things turn around, it's about the time I get off. He's so out of shape, I want to take it easy on him. Right now, that means no more than 30 min under saddle, and mostly at the walk. I don't want to rush him into shape. I want a balanced, supple and well developed horse as I head into good weather season. For now, it's nice to be able to take it easy and work only on his condition and my seat position.

This afternoon, my farrier came back out for a follow up visit. I was adamant that he come out today due to the problems Guinness has been having stumbling. I think his toes are too long, and he's starting to chip around his quarters too. My farrier agreed, and nipped down his long toes. The farrier isn't a barefoot practitioner, but he is familiar with the practice of rolling up walls, and did a really nice roll on his wall edges to help with breakover. I didn't realize how fast Guinness' feet were growing until I took a look at what had been taken off. Almost a half inch! Wow. And, he walked off tender, but not lame. I Keratexed the newly exposed wall/white line and sent him out in the pasture to walk it off.

After talking with the farrier, I feel so much better about his feet. His wall is noticeably thicker and stronger now than when we first pulled his shoes, and his feet are spreading out remarkably fast, and he's even re-growing a real heel! It really is amazing how quickly hooves can change when they are given the ability to move. Now, if I can keep him pain free and feeling good - we'll be out jumping those XC fences in no time! 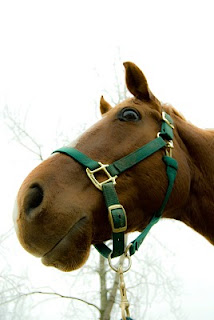