Two Brothers, Both Alike in ... Problems

I wish I could say I haven't blogged a lot recently because I've been so busy riding. But ... actually I've just been overwhelmed by work and both boys have been depressing the hell out of me. Sorry, y'all.
Why the depression though? Well. Mostly because both of my horses have been doing their best to be as lame as possible. Ugh.
As we remember, Pig had an abscess from hell that lasted almost six weeks before exploding out through a 3 inch rip in the back of his heel. That finally resulted in him coming sound after a few days. Unfortunately, that has not been the end of his spring ailments. I should have seen this coming. After all, the old man has been notorious over his life for being accident prone.
First he came up with an unexplained fat hind leg. 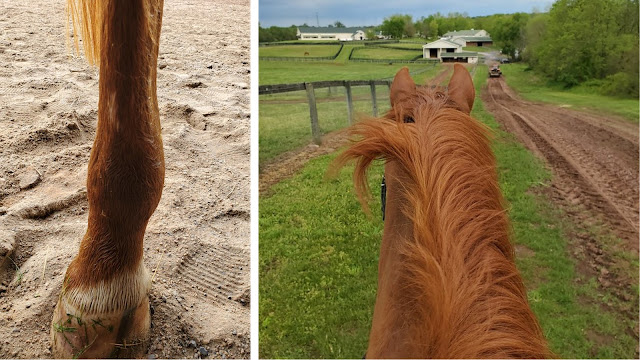 I figured it was an the spring fungus starting up, and broke out the aloedine. Frequent scrubs with that and sprays of anti-fungal stuff has managed to get the leg back to normal. Thankfully he was never lame on it, and still ended up getting his regular walks in. Unlike his brother...
What's up with Bast?
First was the day I showed up and he was so lame it looked like he'd broken his hip. I tried to stay cool, but the horse didn't have a single scratch on him. The only weird thing we could find was a slight swelling in his groin. Meanwhile, he was trotting like this:

And like this:
We were all at a loss. He had no heat in the foot or the leg, and only a slight swelling on the back. Concerned with how absurdly painful he seemed to be, I called the vet out.

For several minutes, the vet was sure it was cellulitis of the sheath. Then he decided to test the foot, just in case. And lo and behold ... an abscess appeared. A tiny one, easily pared out.
It's hilarious to me that Bast was so ridiculously dramatic, while his brother with an infection 1000x worse was galloping around just fine. Even so, my giggles only lasted a few days... Why? Because Bast was only sound for a few more days before his foot started causing more problems.
All week he was down with a sore toe. He never exhibited the same devastating lameness as before, but I kept him wrapped with animalintex nonetheless. By Wednesday, he was apparently over the treatment. After kicking himself free of the crossties (and my barn manager), he fled without getting his foot wrapped up again. My manager saw some drainage from the cut hole while she was holding on to my flailing idiot child, so I was slightly heartened (and completely embarassed). 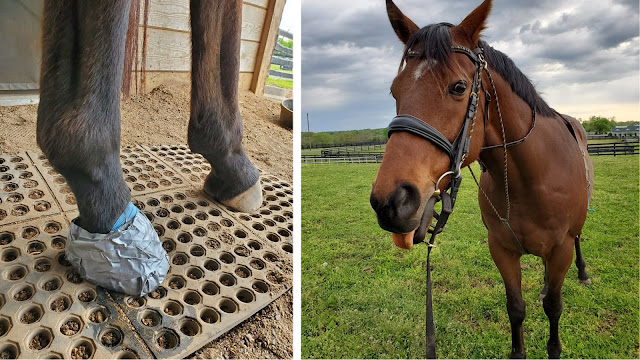 Sure enough, Thursday morning he was looking sound and sassy on the lunge. So, Saturday I was looking forward to hopping on and taking him for a long walk to loosen up. As I tacked up, my phone rang. It was Pig's lease rider, asking me to come down to take a look at him with her. What now?
Turns out he'd just been nailed in the lower part of his hind left hock, and it was hugely swollen and angry. A preliminary investigation showed a very shallow cut that didn't really break the skin. The location of the trauma is concerning, but so far things seem okay. He actually spent most of Saturday resting the other hind leg. 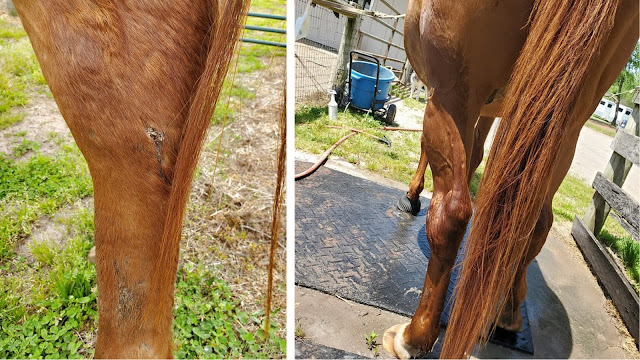 By this afternoon the leg was still swollen and hot, but he was moving well on it. Only a lingering stiffness was slowing him down. I'm keeping him on bute through Monday, but things are looking good. Still, he's not out of the woods as far as cellulitis goes. Needless to say, we'll be keeping a close eye on the old man for the next few days.
Luckily, I left the farm today with one sound horse (knock on all the wood). Bast and I finished a lovely 5 mile loop on the trails. It was lovely to feel him trot and canter happily down the trails, without a hint of his sore back foot. 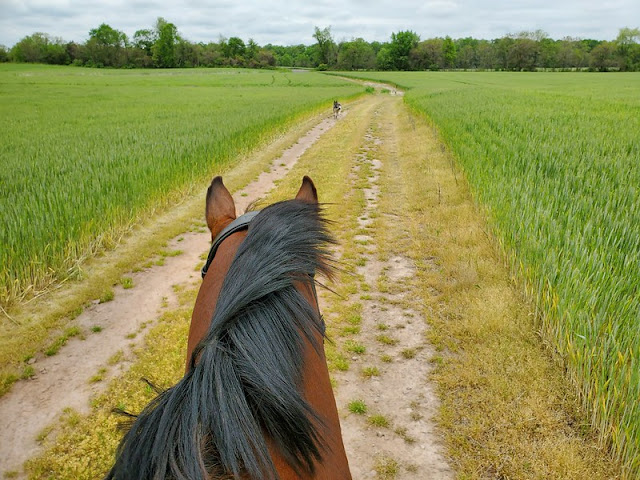 Anyone else out there been struggling with abscesses? Pretty much everyone seems to have had one at this point. I'm hoping you all are having better luck!
Labels: abscess Baybuilt Guinness injury lameness