These Boys Are Full of Holes

When I last left you guys, Pig had just taken a bad whack to the left hock and Bast was (maybe?) recovered from a minor abscess. Well, in a week's time we've had quite the round of updates.
Pig's hock continued to look hot and swollen for too many days. Tuesday afternoon I ended up calling the vet and making an appointment for Thursday. Of course you all know that means Thursday morning his hock was back to it's normal size and the wound was looking good. Still, the vet agreed the length of time the joint stayed hot was concerning. She suggested we start on SMZs, and be really proactive watching for infection.
Friday morning things looked great, but Saturday the whole joint was even more swollen than previously. It was flame hot again, too. Still, the wound itself looks really good. It's at that stage of healing where it looks really gross, but is actually doing great.
The vet wasn't too worried, suggesting we put him back on bute for the day and aggressively cold hose to bring down the inflammation. Since he was still very sound, he didn't see a problem with walking him under saddle, too. We can't rule out a chipped bone or other damage. However Pig is retired and trotting out soundly (for him). The vets and I aren't interested in pursuing further diagnostics, since any injury of that type isn't interfering with his movement. If this was Bast, we'd be looking at different options, I'm sure.
Speaking of Bast, he'd been ridden all week. We ended up doing 5 miles on the trail with a friend after our week off. Then Tuesday and Wednesday he gave me some fantastic dressage rides. Thursday I joined up with the same friend, and we did 6 miles out on the trails this time. It was lovely.
That 6 miles started off with my very fresh horse wanting to trot forever, and cantering boldly up the hills around nearby fields. Eventually, we veered off the wide grassy trails and into the woods around the big creek. This is a section of trail I have never taken Bast through, in fact I haven't been on this trail since retiring Pig in 2017!
Bast was fantastic. He learned all about wading in creeks, spending a lot of time walking back and forth in the water while I tried to remember where all the crossings lead out. He even realized he could drink from the creek, and happily slurped away for a minute. This is a huge success for a horse who jumps every small crossing like demons are in the ditch. We reached a spot where the trail was blocked by a downed tree and an angry buzzard. In trying to find another way around, Bast stepped in very unstable ground, sinking to his knees on two legs. I was so impressed with the little man. He didn't panic, even though he was freaked out. He let me point him towards the creek again, and jumped in gladly. Choosing the water over ground was a huge moment for him. I hope it sticks, though I'd rather not experience that unstable ground again.
After turning around we completely lost the trail, and I asked Bast if he would bushwack up the steep hill. An old trail used to climb out there, but in the years since I've ridden back there it's been abandoned and completely grown over. Bast didn't blink. He lead our friend's much older horse calmly out of the woods up this steep overgrown hillside, only pausing to ask me which way he should choose to go. He was a total champion, and quite relaxed about the whole thing.
With 2 miles left to get home, we did a little more trotting and cantering along the grassy trails. Bast felt good at first, but as we approached home he felt a little drunk in the canter. Finally we stood in the front field for a minute while my friend galloped her horse a little. When I asked Bast to move off, he was suddenly a bit lame on the right hind. We immediately headed home, and I started checking him out.
I found zero issues with the leg itself, and wondered if he'd stepped on a rock where his abscess had been pared away. Worried, I ran to the store for some wrapping supplies (and Swat, to help keep flies off Pig's leg wound). By the time I got back, he was dead lame. From the way he was walking on the toe of the foot, it was obviously an abscess again. I wrapped him up, and sent him off much happier.
The next day, he looked much better. Saturday morning we found this: 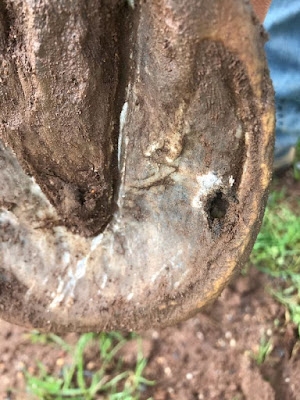 While much smaller than Pig's OG Bat Cave, it's still a significant blow out. I take back some of what I said about this little horse being a huge wuss about pain. From what I figure, standing in the creek for close to 10 minutes total seems to have swelled the foot enough to bring the infection out. It was really scary to have him come back from that trail lame, but I'm glad things seem to be resolved for now. (Please cross your fingers.)
If the youngster is feeling better at the walk and trot today, I'm looking forward to scheduling out some lessons. We've been doing really well on our own through the quarantine. With things lifting a bit out here, I'm excited to start pushing the envelope of our training (and send some money my trainer's way). I could really handle a bit more focus on training and a bit less vet visit excitement in my life!
Labels: abscess hacking injury lameness Vet