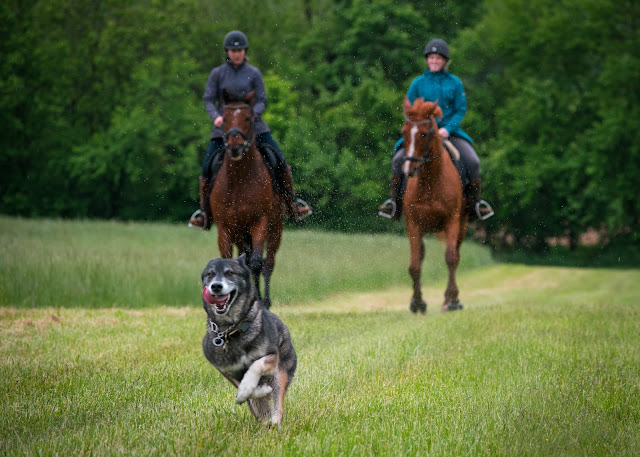 I'm so loaded down with work and personal life, that blogging has taken a backseat. Fortunately for you guys, my personal activities are mostly horse related. I'm trying to jot off a few quick update posts for this week documenting some of our goings-ons, as they're pretty fun! (Stay tuned to the bottom for the winner of my Janet Foy book contest, too!)

Up first? Gallops with Liz during her visit last weekend to audit Janet Foy (write up still coming when I have time to think!). I finished pouring through the photos taken of the two of us last week, and couldn't stop giggling at Pig's expression. He is such a moody character, especially when I pair him with other people.
Thoroughbreds, man. Some of them are too much like German Shepherds... They're overly devoted to their one person, and an equal opportunity asshole. If that doesn't describe Pig, I don't know what does!

I know you guys (like me) love Pig, so I couldn't resist sharing these photos of him being completely absurd.
Honestly, Pig is probably the safest horse out there. But, he is not easy. He wants a very particular kind of ride, mostly requiring little to no input from the reins. In fact, if you could just ride him on a loose rein, that would be perfect.
The problem is, he tends to get excited and shake his head around. For a normal horse, this usually indicates a bit of exuberant bucking is about to follow. Understandably, this freaks people out. However, Pig is pretty much incapable of bucking. In fact, he's honestly certain he's being really naughty and scary when he shakes his head.
I try to appropriately appreciate his "reign of terror" so he never feels the need to exacerbate things. It works for us. He gets to feel like he's expressing his feelings, omg. Meanwhile I get to enjoy having a horse who is basically the safest creature on the planet. (Unless he trips, because, let's face it. This horse might kill us both someday by tripping...)

Other people are yet to figure out how to manage his opinions, though.
The normal reaction for most people riding out Pig's head shaking hilarity is to shorten the reins. Unfortunately, that's the absolute worst thing to do with him. Shortening the reins with Pig can send him straight into Murder-Pig territory.
While he literally does not know how to buck, Pig does know how to lift up his front end. If he feels too restricted in the mouth, he has no qualms about flinging his front end around. I wouldn't call it rearing, but I would call it opinionated flailing. Graceful he is not.
But despite his many opinions, Pig did manage to safely carry Liz through two days of trail rides, over many streams, and across fields at a canter. It wasn't until we got back home and found demon-filled wooden boxes that he really decided he was done with this person and had a meltdown. He's a spooky horse and requires his trusted person to soothe his fears.
Still, I'm so thankful that this old man is such a good citizen. He might have once gotten me a 1 in the dressage ring at 4th level. He might have failed out of a therapy program for hating humans and being scared of pigeons. His opinions might scare others and make for hilarious photos. But overall he's just the best... and so is Liz for putting up with him.
Now, for the contest winner! Wrote names of all the entrants on pieces of paper then dumped them into a box on my desk to randomly draw. As luck would have it, Cathryn of Two and a Half Horses you are the winner! I'm reaching out to you to get your information to get you this book. I hope you enjoy the book!
Labels: contest Guinness