Dressage at Twilight Eventing: The Test

As promised, I wanted to show you and break down Bast and I's first attempt at a dressage test at August's Twilight Eventing show at Loch Moy Farm. The biggest thing for me at this show was making sure the overall experience was positive, which I think we managed. The test was really secondary in my priorities, and honestly just not that important to me. This young horse and I have plenty of time in the future to stress about our test performance. This year is just for building the base of relaxation and respect at shows.

That said, I still wanted to put our best foot forward. I was also very interested to see what parts of our training at home would stick around at a show, and what issues would be more apparent in the ring. Basically, this was an opportunity to get to know "Bast the Show Horse."
With that in mind, I was very pleased with how the test went. I'm beginning to realize Bast sees a dressage ring as his "comfort space." Every time we get in the little box his hamsters seem to calm down and he is there to work. All that early schooling at the dressage barn really helped set him up, I think. I'm sure the 40 minute warm up didn't hurt.

Let me start off by saying we didn't practice at all for this test. I cursorily rode it in a tiny corner of my home ring the week before the show... once. In that basic ride through I realized a few things.
1. Compared to third and fourth level this test was basically the easiest thing to memorize.
2. I had never done a trot/halt with this horse. Or a straight centerline.
2. Canter departs were going to be really difficult to contain in a small ring.

We schooled the halt transitions a few times, I reconciled myself that they would be an utter mess, and packed for the show. I don't remember schooling a single one in the warm up.
We ended up with a 5.5 on our entrance and the comment "HQ very left". I think that was a very nice way to describe the weaving entrance we made. I'd probably have commented "needs to be pulled over for a possible DUI." But, this is why I am not a judge.

Somehow we ended up pulling a 7 for our trot and 20 meter circle left. When first reviewing the score, I thought the judge might have been totally high in her box. What I rode out there felt a lot more like wrangling a herd of squealing weasels through a chute than guiding a young talented horse through a basic circle. But then I saw this photo and kinda understood.
Moving on, my loosely united horse-shaped weasel family and I headed off to do another 20 meter circle (seriously, when in doubt in this test, just circle. It's basically just 20 meter circle after 20 meter circle out there). This time with a canter depart! The weasels Bast found this very exciting.
I love how you can tell I was 100% expecting this canter-splosion. I'm so in balance with him and ready with my outside aids to wrestle his butt back on our line. Oh Bast, I'm getting so wise to your weasel-ways.

The judge awarded us a 6.5, noting the depart was "tense" and we "need bend." How tactfully understated, madam.
The test calls for you to transition to the trot between B and M. Having read the test, Bast thought he'd help out and totally quit cantering on me a stride or two just before B. As he was hanging out about a mile behind my leg, I was unable to keep him going and just pretended "I meant to do that." We received a 6.5. I attempted to explain to Bast that if he prefers to do the test on his own, he needs to make sure he doesn't lose his balance.
Somehow what felt to me as the worlds most retracted medium walk scored a 7. The judge asked that I keep a softer rein contact. That's great advice, and I will totally follow it when I actually have rein contact. I'm unsure what either Bast or I were doing with the reins here, but it was definitely not "maintaining contact."

This really showed when we headed into the free walk. Without contact you can't expect a horse to stretch in the free walk, especially if this horse is tense. As the judge said, our free walk had "nice energy" but his poll was very high. (6.5)
I was very sure this trot transition was going to be a total explosion, so I barely cued for it and was rewarded with a prompt and fairly quiet transition. However, as we scooted off in the trot, Bast felt so proud of himself he had to trumpet his success to his people. As the judge remarked, this made his topline "tense". I would actually disagree. This did not just make his topline tense, this made his whole body go rigid like a 2x4.

This makes it more impressive to me that our next movement, a 20 meter circle of course, scored a 7. The judge wanted to see Bast more in my outside rein (so did I), but overall seemed to really like the picture. By this point he felt like he was starting to relax a bit and drop into the contact in the second half of the circle.
Unfortunately we somehow destroyed any budding relaxation with our next 20 meter circle and canter depart (omg this test is so symetrical). Somehow Bast's truly impressive twisting and bolting weasel impression scored a 6.5.
While I knew what was about to happen under me, I was woefully out of balance and it took me most of the circle to get some semblance of control back. The judge commented that our depart and topline were both tense, but I feel that's only half of the story.
His canter to B scored another 6.5 with the judge pointing out he needed more balance. I'd like to remark again that I tried to explain to him he needed more balance but he was more interested in looking around and ignoring my legs.

That lack of balance really came into play when Bast again decided to try to break to the trot before B, and I closed my legs to ask him to "please for the love of god canter 2 more steps, you dirty bastard."
My polite request must've been truly screwed up in translation. Instead of simply carrying on, Bast both discovered he had legs and realized he didn't know what to do with them all at once. The result was ... messy.
He wiggled, thought about leaping out of the ring, wiggled again, swapped leads, then stumbled to a trot. Sigh. Young horses. By some miracle the judge gave us a 6.5 for this (she had to have had her eyes closed...) with the request to please for the love of all that is good "keep straight".

Immediately we had to turn up the centerline for our final halt. Those centerline turns are so hard with green horses, but somehow we made it happen. By this point Bast was getting quite tired and had fully committed to the wiggle game.
Our halt was even more disorganized and crooked than the first. Bast decided he was so tired he simply must rest, and cocked a leg in the halt. The judge gave us a deserved 5.5 for parking our hindquarters somewhere in the parking lot to the left of this ring, and we called it a test. 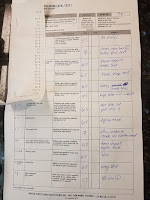 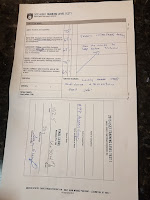 The judge gushed over Bast after our test. She was so impressed he was a thoroughbred, thinking him a baby warmblood. She ended up giving him a 7.5 on gaits, which is just ridiculous. She also gave me a 7.5 for my position and seat, which I think is the highest any judge has ever valued my position.
Video Here
Overall we walked out of there with an insane 66% and several experience points. I can't wait to do this again! (Maybe with more practice on the actual test riding this time?)