Sunday, I had hopes for more exciting tests. I was hoping I could push a for a little bit more from Pig and show off a little bit. 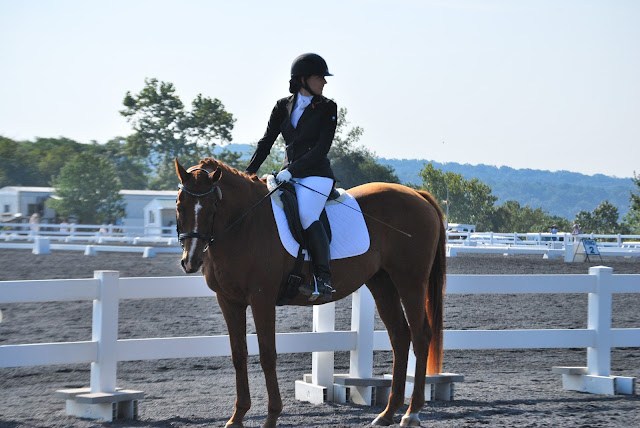 Unfortunately, I screwed up my times and ended up ready for my first ride time an hour too early. This meant had to make the hike from the barns and back twice. While this gave me an extra 10 minutes to hold an ice pack to Guinness' leg, it didn't help keep energy in the tank.

Once I got on, Pig felt tired and was more finicky in the contact than on Saturday. I kept to the same warm up routine, this time more to conserve energy than to conserve soundness. Pig felt sounder than on Saturday, but much stiffer and more flat. I had a passing moment where I considered scratching, but decided to go in anyway.
The test felt solid, but flat. I knew I had lost energy in our two turns on the haunches, which were coefficients. I figured with that issue we probably hadn't made a 60%, and I was right. We'd scored a disappointing 58.718%. The judge was hard, but I thought very fair. We missed a placing in our large class by a few 10ths of a point. 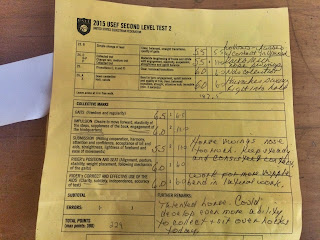 The judge nitpicks our connection and Pig's collection. I totally agree with her. He was lighter in the connection and not as through as he could be. He also tended to drop out in my half halts. We still need more consistent bend in our travers.
Still, we put in a solid test without big mistakes (ouch on the 4.5 simple change, though deserved!), and I am happy enough with it. Pig kept his neck down for the most part, and stayed with me. Even if the collection was lacking we had a decent attempt on our mediums... for us.

In the downtime between tests, I tried to give Pig time to nap while I wrapped his leg with ice. Our stabling companions were amused that I joined him in the stall while I re-hydrated and refreshed myself on my final test (2-3).
When I got on for 2-3, I knew we were in trouble. Pig was exhausted. I knew he wouldn't give up during the test, but I worried about losing his cooperation in trying to keep his collection. After a brief warm up (99% at the walk, with a little hard counter canter work to remind Pig "NO CHANGES"), I headed to the ring... where we were basically eviscerated.
When I entered the test I thought to myself "get as much energy as you can without stressing him out," and I think we did just that. I thought the test went alright.

We had a couple of moments, of course: A "motivational discussion" needed to be had during the turns on the haunches (Coefficients, again. I hate this level.), and my soaked-with-sweat full seats ended up sticking my butt too far back in my saddle when I started my last medium canter. There's a hilarious moment where I am flailing everywhere at the end of the medium, trying desperately to unstick myself. Pig comes hollow as if to say "What are you doing up there, lady?!" But otherwise, I felt the test was clean, if flat and tired looking.

I left the ring extremely proud of my horse. Though exhausted he had tried his heart out. When I asked for more in the second half of our last medium trot, he gave. When I asked for him to come up the final centerline with a little more bounce, he dug in and gave. Imagine my surprise and horror when I picked up this score sheet... a 54.634%.
I won't lie. Writing about this test has been quite hard. My thoughts over the last few days have ranged from horror, to frustration, to anger, to resignation. For awhile I wondered if maybe we just aren't capable of getting decent scores at any level above First.

See, when the judge wrote "trot very irregular" and gave Pig a 5.5 for gaits, I was very hurt. He didn't feel "off" to me. I wondered if maybe I couldn't feel it, and I was torturing my poor horse by riding him while horribly lame. Then I wondered if he is incapable of the gaits needed for this level. Unfortunately, the video of the test was originally shot in a slow motion setting, and I couldn't bring myself to watch the whole thing until it was fixed. (It's hard enough watching yourself, far worse when every painful moment of your not-great test is slowed to molasses.) My show friend consoled me by saying that "Yes, Pig looked very tired. But not lame." She was watching him closely, and knew which leg to watch. She said he had a few bobbly steps, but nothing that would have warranted pulling or concern from the judge.

My friend (and Emma and Allison via text) did echo my thoughts, though. Being so exhausted, Pig looks irregular in his mediums. As this is the first movement, the judge probably formed an opinion of him there, and was looking for it the rest of the test. Still, the collectives are lower than I've ever had in my life.

We weren't the lowest score in the class. In fact, the whole class was scored harshly. I heard murmurs from across the grounds that this judge was incredibly rough, and that riders were scratching to avoid getting their percentages ruined. I'm not going to call this score "unfair", but I do think it was very hard. A score of 4 (insufficient) for my medium trot is fine and expected. A score of 4 for my shoulder-in is ridiculous. We needed more bend and engagement, but we demonstrated the movement consistently. We received the comment "...then nice stretch" in the free walk, one of the best of my show career with this horse, but scored only a 6 (satisfactory). It seemed the only thing this judge approved of was our ability to enter and exit the ring (7s).

I've decided to put this test behind us. It was terrible, but I don't feel the score represents where we are in our training. My horse was exhausted and couldn't be expected to carry himself to the level he needed for good scores, but he did a fantastic job. He was compliant, and very willing. I poured on pressure, and he put his head down and said "I can do it!"

I am so very proud of him. I can't ask for more.
I'm not sure where the scores from the weekend put us in the IDS end of year awards, and I'm not sure if we'll show again this year. I just started the job search in earnest, so most of my energy is now going towards that. We'll see how things pan out...