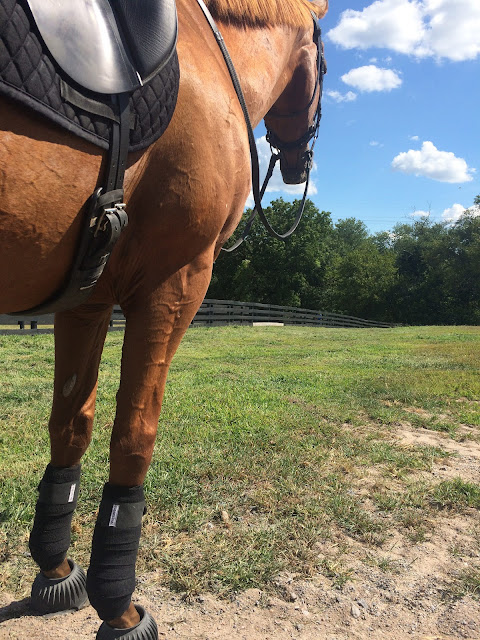 Well, I did it. I entered a local recognized show for this weekend. Though I think we could make a better showing at 3rd than in May, I've decided to hold off on showing 3rd until next year when our changes are more confirmed and relaxed. For now, I'm focusing on upping our score percentage at 2nd (hopefully), and qualifying for those IDS end of year awards.

For the last couple of weeks, I've started to put more pressure on Pig. I need him to keep his brain intact during the fast paced tests of 2nd level. Last week he put in stellar work Tuesday-Thursday, running through all the trot work and canter work of the 2-1, 2-2, and 2-3 tests in chunks. When I tried to put everything together on Friday, however, he was a nervous wreck.

Too many days drilling, apparently... 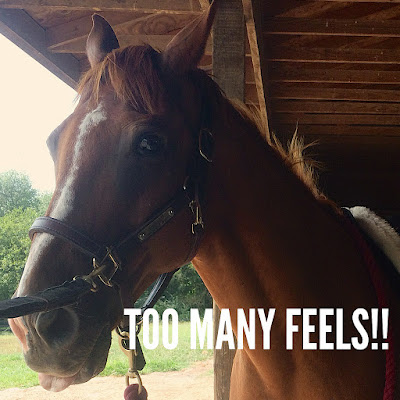 I'm trying not to let one subpar test run-through get me down. I know this horse can only handle pressure in small doses, and 4 days of it is just too much. Still, it's very annoying to have three amazing and relaxed rides followed by one so wracked with tension that any progress is obscured. I know we are better than the so-tight-his-head-wags pair I see in this video, but I also know the video looks a ton better than the ride felt.

Also, our terrible test still had all the movements intact, and in the right places. (Though, I clearly need to school more 10m circles and review ring geometry. Oops!) Second level is firmly within our skill set, and I would call this horse "confirmed" here. Now it's less about "can we" and more about "make it the best it can be." A subtle difference, but one that is fun to try out.

We'll be showing 2-1 & 2-2 on Saturday, and 2-2 & 2-3 on Sunday. Obviously 2-2 is my favorite second level test. I've taken to calling 2-1 "simple change hell" and 2-3 "the dance of the flying change fairy". The trot work in 2-1 is also quite difficult, going from a shoulder-in to crossing the ring straight across to the opposite shoulder-in. There's quite a distance for the shoulders to travel to get to the second shoulder-in. That's tough for a horse who tends to get tight.

As for the differences in the tests themselves, in 2-3 the medium trots are both across the full diagonal, where in the other two tests they are on the short diagonal. As medium trot was probably invented to torture me, I don't like having to hold it any longer than I have to. However, 2-3 sets up the shoulder-in and travers the best, with a 10m circle between the two movements. In fact, if 2-3 did not have the coefficients on movements we regularly struggle with (simple changes and turns on the haunches), I would like it well enough to show both days. In 2-2 one of the coefficients is the second medium trot, which has the ability to possibly destroy our score. I'll have to at least make sure that one is slightly better than the first. In 2-1 the coefficients are mainly just the shoulder-in and free walk. That's much easier to handle.

In a recent lesson, lowering the neck between each movement (and especially before the medium gait work) was suggested to me. This seems to work very well to get Pig thinking with me, and set up to achieve the right amount of lifted wither and reaching frame. A lower frame also tends to keep him in the bridle a little more, where before each movement would lift his frame higher and higher until I could no longer touch him. I can't get a lower frame without relaxation, though. That is clearly the name of the game.

This week the plan is to school Monday-Wednesday. Give Pig Thursday off to relax and decompress, while I shine up all of our tack. Friday we head to show grounds (It's only 20 minutes away! I can't even comprehend this!), and Saturday and Sunday we dance. I'm fairly confident that schedule of three days of hard work with a decompression day will work for Pig... but that's really up to him...