So Lame: The saga continues

You may have noticed Pig looked kind of off in this video from earlier in the week. I didn't mention anything, partly because I was trying to stay in the land of denial. That's my favorite place to hang out when my old horse is gimpy and I can't find a single thing wrong with him.
Seriously, though. I couldn't find anything actually wrong with him.

Nope. Just a little off, not working out of it, and without any heat/swelling/cuts/bruises/marks of any kind on him. So I free lunged him just to make sure I wasn't imagining things....

I've had this old horse for a long while now, and because of him have become pretty proficient at performing an impromptu lameness exam. So at first sign of persistent "off-ness" I palpated his tendons. No response. I flexed him at the joints that still flex. Nothing. I tapped on his feet. No response. I basically whacked on his legs with a pole to find a weakness. Nothing.

I did find a spot of deep suculus thrush, with corresponding heel soreness. And, I thought, maybe that's it?

So, I showed up yesterday ready to do battle with sore feet and thrush (silver spray, keratex, magic cushion, the works), only to find...
Shit. I've been here before. It's kind of amazing to me the number of times this horse has whacked himself, resulting in a bruise or catastrophic lameness issue. I'm not really sure how he's made it to 17 years of age with all of his limbs still functionally attached to his body.

Despite being sad he is on the injured list (THREE DAYS BEFORE A BIG SHOW), I'm kind of happy this bump showed up. Why?

1. It's a classic splint. It's a hard bump on the bone. ZERO soft tissue involvement there.
2. Now that it's shown up, it'll be just a minimal time to heal.
3. I finally have something to focus on, instead of wondering if he was somehow broken somewhere really serious and on the final leg of his retirement parade.

With a probable diagnosis I headed off to treat. Ice, bute, compression, more ice. 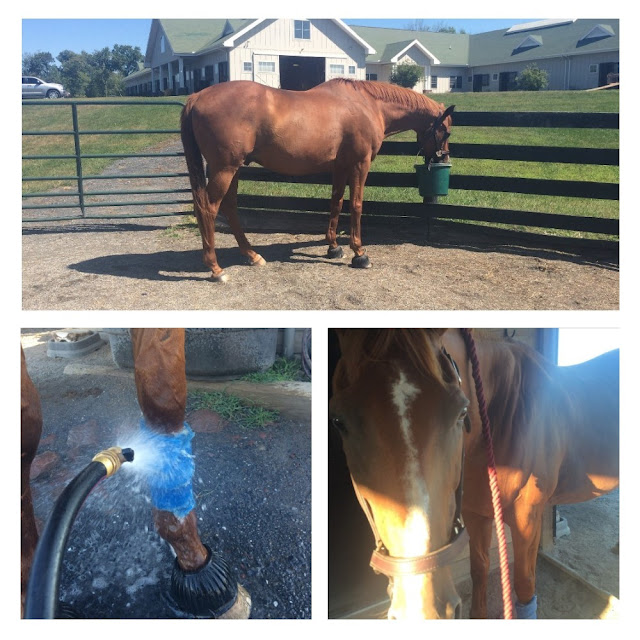 I'm off to the barn to do much the same today. We're still planning to head to the show on Friday. It might seem cruel, but he's not that lame, riding isn't hurting him, and it's too late to get my money back. If he's worse, we'll scratch. If he's not we'll make an attempt. I'll bute up until the minute I have to stop (cue rereading USDF drug rules...), and we'll see how it goes. My hope is that now the splint has shown itself, it'll heal up fast. It tends to do that.

A trainer mentioned there's a woman coming to do laser therapy on a horse on Friday, before we leave for the showgrounds. It seems like total crazy-horse-person-wasted-money to me. Anyone have actual evidence to the contrary?
Labels: injury lameness splint