Last Sunday was the Indiana Dressage Society's June schooling show, and Guinness and I gathered our entourage (including a hunter-world friend, my excellent friend Jen from CobJockey, and her captivating cob Connor) and made the long trek over to the Hoosier Horse Park. We had a fantastic time.

I really have to give IDS some credit. Both of their schooling shows this season have been really fun, run smoothly and everyone has been very pleasant. I've enjoyed meeting lots of new friends (hi!), and just relaxing by the barns. I won't mention the sangria at the competitor's get together ;)

Our plan was to warm up with Intro C, then do Training level tests 2 & 3. Unfortunately the way the times worked out, Training 3 was first at 2:30, Training 2 at 4:30 and Intro C was set to ride at 5:39. Add to those times temperatures in the mid 90's and Jen's rides starting at 8:30a and you have a recipe for a very, very long day.

I followed much the same routine as the last IDS show in May, getting to the park the day before and just letting Guinness settle in. He doesn't need a ride in the rings, we've worked on that relationship enough. He really looks to me, and is often better in new situations and locations than at home. I was happy with how easily he traveled and how quickly he settled in, drinking water like a champ and eating all of his travel hay.

Sunday was hot, but we stayed fairly cool until time for the first test. I got on and warmed up completely ready to go in and rock out Training 2. As I'm sitting at the in-gate, I notice the rider ahead of me has turned left instead of right after her centerline ... um ... uh oh! This isn't Training 2, it's Training 3 (the much harder test)! I quickly rounded up a copy of the test from the excellent ring stewards, read through it as a refresher and handed it off to my friend to read. I tried to relax and think bend, something we hadn't really warmed up too much. Oh well.

Honestly, I was happy with the test. Guinness was fairly cooperative, and moving into my hand. The bend was there, just not where it was supposed to be. Our main problems were transitions. Coming down to the medium walk I gave too much aid and Guinness came all the way down to a halt. It's just a step, but that cost us points and we scored a 4 here. Another 4 moment came during the transition from the first canter to the trot. In Training 3, this happens at X on a diagonal. If I'd had my brain installed for this test, I would have started preparing Guinness for this back at C (before we even turned onto the diagonal). Instead, I just rode him forward and he gamely offered a flying change. I could feel it coming and tried to resist, but that lovely interaction got us the comment "Tense flying change" on our score sheet. Oops.
Final Result: 62% for 6th place out of 7

Training 2 was much improved. The test was simpler, so that was nice. I had it memorized and headed into the ring. I felt like the first half of the test was going well, but towards the end, I started to really fall apart. The heat was getting to me, and I was letting the reins slip out of my hands instead of containing Guinness. Our bend could still have been better, and my accuracy more so. Our halts were pretty decent, and the judge seemed to agree, giving me an 8 on the final halt.
Final Result: 67% for 2nd place out of ?

I was planning on scratching from Intro C, but with my ride time only 20 minutes away from my last test and my horse still having plenty of "go" still in him, I decided to just go for it. Since I had planned on scratching, I hadn't really looked at the test. I headed to warm up, while my friend wandered over to the ring to get ready to read. Guinness felt a little flat, and bored. So, I took a little calculated risk. I pushed him into a very forward canter and asked for a few changes. He immediately perked up. The changes weren't pretty, but they seemed to work. When he was listening and we had one good change on the aids, I headed right into the ring. The test was very steady, and while Pig still popped up a little in our transitions, it was our best test of the day. The changes really helped me get a little extra "oomf" out of his gaits.
After our final halt, I leaned down and gave Pig a huge pat. He'd really been there 100% all day, and that was such a good feeling. On our way out, the judge stopped us and gave me a really wonderful compliment saying she could see just how much my horse really liked what I was doing on him. She heaped praise on him and told me a story about a little hot horse she used to have. We compared notes for a little bit, chatting for maybe 5 min. That was really nice, and I appreciated her comments so much. I thought about them the whole time I washed Pig off and helped everyone pack the trailer. I was the last ride of the day, so everyone was ready to leave. My Mom went off in search of my last scores and came back bearing gifts:
Final Result: 75.75% for 1st place out of at least 9 rides. On hearing the score, I joked "I guess I was really okay skipping all of Intro ..."

While this test was Intro, and not as challenging as the other two, I'm really happy I did it. Getting comments from the judge that were so positive, and affirming (especially since this was the judge I'd failed under during Training 3), was a real boost.

I'm so proud of my little red machine! 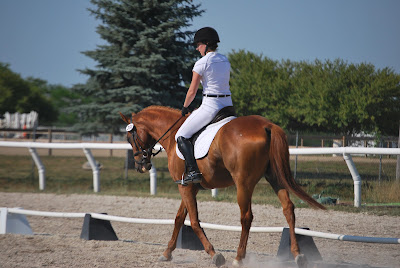