It's taken me a long while to feel up to bringing another dog home, but a few weeks ago I decided to take the plunge. I've been looking seriously for awhile now, but have been very picky. Basically, my kind of dog is the one no one else can stand!
With Sonka gone, I realized a lot of things he did for me. I missed them. He would refuse to let me sit lazy for long periods of time. He had a very highly attuned sense of timing, and would let me know it was time to get up, time to run, time to feed him, and time to do things. Lyra, by contrast, is quite lazy and content to lie abed until noon. After struggling hard without Sonka's guidance and insistence for movement and action in life, I resolved my next dog would be another high energy wild child.

... oh, and also scary looking. Because, let's face it. I run by myself a lot. And Lyra is not much of a guard dog. I need a dog that makes someone think 6 or 7 times before they even consider messing with me.
So obviously when I ran across this girl in the recent listings of shelter strays, I was immediately interested. However, the timing wasn't quite right. I didn't feel ready to pull the trigger in mid-May, and I absolutely could not make it to the shelter. Her photo disappeared from the site a few days later anyway.

By mid-June, I had started visiting shelters. Disappointed I hadn't found what I was looking for yet (and feeling like taking every dog home), I kept searching the local online listings as well. That's when that beauty of a dog popped up again, at the same shelter. I called that day, found out she had no applications yet, and made plans to go see her as soon as possible.

That's how Asterid and I met the first time.
The shelter warned me she was very aloof and shy. She had been previously removed from their listings as they were not sure she was adoptable. She had failed their first temperament testings for extreme shyness. As this is a kill shelter, being pulled due to a temperament test failure almost meant she was a goner. Thankfully, they gave her a second chance.

"She probably won't even come up to you. She's not overly friendly," they told me. I assured them this was perfect, as it was absolutely. My Sonka refused to acknowledge my presence the first time I met him. Huskies can be like that in the shelter. They either shut down or become overly outgoing. It's sad so many end up there, as they are particularly ill suited to the place.
As predicted, she didn't meet me. In fact, I had to actually use the leash to get near enough to touch her. However, she wasn't aggressive, seemed extremely intelligent and curious, and moved like poetry. It was love. I applied immediately, and was almost immediately approved.

Upon picking her up, I decided on a name. I'd been struggling for the days since her pick up date was scheduled. The day of her homecoming, I knew. It just came to me. Asterid.
Asterid for the Asteridae, an old botanical sub-classification of mostly flowering plants, including the burdock plant. Burdock being the only thing that currently grows on Sonka's grave.

Asterid also for Aster, latin for star. As she is all of the colors of twilight bound together with wild energy.

Finally, Asterid also for -aster, the botany suffix meaning "incomplete resemblence" for all that she resembles, and yet very much does not, my Sonka.
I don't know exactly what breeds are mixed up in her. She's definitely some sort of husky, but beyond that I am not sure. She may be out of sled dog lines, as there's a local breeder who has many wolf-gray or "agouti" dogs, which is her coloration. Yes, Siberian huskies come this color. It was mostly bred out of the show lines in favor of the popular black/white with blue eyes, but used to be quite common.
She might be four, or she might be younger or older. I'm settling with four. Her coat is still very short and her energy very high-- both indicative of a younger husky. Four is a good age to start a new life.

So far she is settling in nicely. She and Lyra are the best of playmates, often wrestling for hours. Lyra took a few days to warm up to Asterid, but overall has adjusted to her presence easier than she and Sonka settled in. The two of them are going to be quite the hellions, I can already tell.
Beyond going on a typical "husky hunger strike" her first few days (and again after being spayed), Asterid has been pretty easy. She came to me mostly potty trained, though I'm unsure if that is from previous experience living in a house or "stray-trained" as I have seen a few times. She had no formal training in basic commands, like "sit". However, she has been mostly civilized on the leash. That's very uncommon for the breed.

Her shyness is wearing off slowly, though I don't know that she'll ever be as forward and demanding of strangers as Lyra. That said, with Lyra as a sister, one must become more outgoing.
She's not as big as most people think. While slightly taller than Lyra (her legs are so long and narrow!), she clocks in at only 47 lbs. Most likely she'll settle in around 50, which is perfect. Lyra, meanwhile, has plumped out to a hefty 43 lbs. (I've taken to calling her "Fat Elvis" after she huffed down two doughnuts at the barn, then a load of hoof trimmings, thus making herself both sick and fatter. Someday soon I feel I'll find her bloated on the toilet with a peanut butter sandwich...)
I can't wait until Asterid is fully healed from her recent spay surgery so I can get back to running the dogs and wearing this mistress out! She's already living up to her requirements, however. She wakes me every morning by 6:15, insisting we stay on schedule and get things done.

What a good girl. 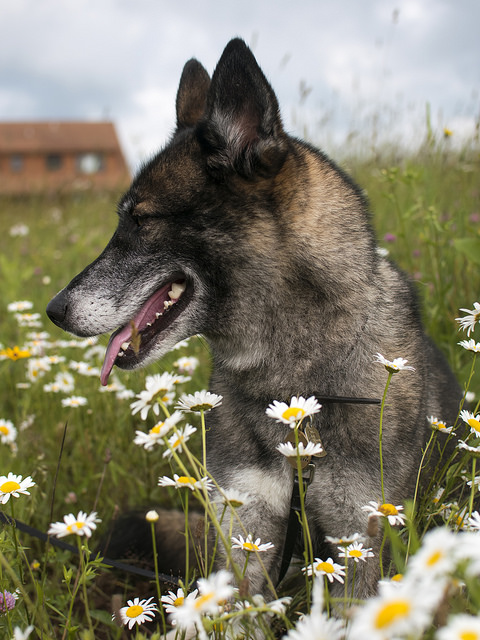