When Your Horse Goes Crazy

Last Saturday Bast crashed a fence.
I had been leading him back from bath time in the main barn, when he attempted several times to bolt back to his pasture. This has been normal behavior. I attempted to work with him some in hand to get his attention back on me, but he continued to fixate on the distance and violently pull away. I moved him into a nearby empty pasture, eventually unclipping him. I figured he would run out some of his antsy feelings in the 90 degree heat of the day, and I could then lead him up. Having done something similar with him before, I settled in for a long galloping session.

Instead, I watched him fail to jump out of the field and crash through the nearly 5ft tall 4 panel wooden fence. It's changed the way I think about his behavior. It's time to get serious about his herd bound nerves and lack of respect for human interaction.
It's time to get real and address problems. His crash through this fence was not blind running. It was a conscious decision. He wanted to get back to his pasture, and he was going to solve his problem himself. He refused to come near me, standing in the field waiting for him to calm down so I could lead him back. Instead he took aim and threw himself right into the fence.
That is not safe, normal, sane behavior.

He was lucky (which is probably a sign he's a terrible horse, since only the good ones seem to have tragedy). His stifle somehow was not shattered, despite taking a direct hit on a fence post at a gallop.
He made it up to his pasture (a little over a 1/4 of a mile from where he broke the fence), and stood outside the gate holding his leg up. I worried he had broken it, as he initially would not put weight on the leg and was very reluctant to walk. The vet thinks he startled himself badly, and the swelling and bruising hurt once his adrenaline dropped.
I had called the vet immediately, assuming he had broken something based on his reluctance to move and would need to be put down. While waiting for the vet, we sat outside the pasture. Bast exhibited some concern about the location of his pasture mates (who didn't care a whit about him and did not come to the fence where he stood suffering), but he quickly became very calm. He stood with his head in my lap. He licked my hands and arms. He wuffled my hair. He acted much like a sweet horse, which is very unusual for him. This further concerned me. I assume the pain was acting like a twitch.

Once the vet arrived, we determined there was no catastrophic break. We decided to stall him until he showed improvement. The plan is to bute for 5 days. While we initially worried, he made it down to the main barn just fine. (You can see how far it is in the above photo.) His walking actually improved as he moved, which bodes well for the injury.
I stuck him in a stall, where he immediately turned to the window and began screaming his dumb head off for his pasture mates. I wrapped him while he screamed like an idiot, he ate his dinner, and I left him alone for awhile to think about his life.
Over the course of Saturday evening and Sunday morning, the swelling increased. I assigned him the nickname "Chipmunk Cheeks" for his swollen ass cheek.
By Sunday evening he was moving much better, and actually resting his other hind leg occasionally. I sat with him for an hour and half, during which time he actually turned his butt to me and took a nap. That is a first. Typically he will not relax that much around people without other horses around (we were alone in the barn, as all other horses were on turnout).
While he was still dragging his toe some, I felt encouraged by the improving look of his leg throughout the early part of the week and his willingness to rest the other one. The vet had cautioned that a fracture was still a possibility, and in that case any extreme movement (such as getting up from laying down flat) could torque the bone and cause it to shatter. Until we can evaluate his soundness further he is not fully out of the woods, but this seems like less and less of a possibility. 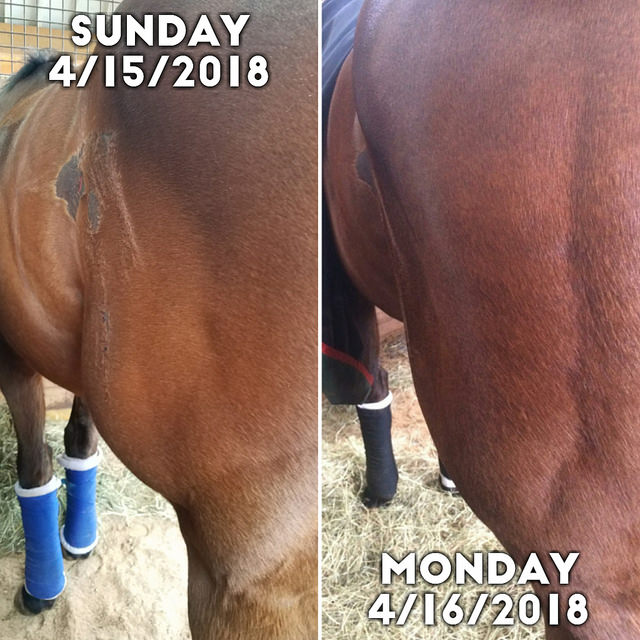 For now his future is a bit up in the air, and not just because his soundness is questionable. I am out of my depth in dealing with his tuned out and willful behavior. He has exhibited time and again a complete lack of trust in people, despite regular and sympathetic handling. His complete reliance on other horses to supply his confidence undermines any relationship he builds with me or other humans. It's not safe, and it's not improving. Clearly something needs to change. I'm working out what the next steps are, but for now his recovery seems to be progressing well and it seems he will make a complete return to soundness.
Labels: injury training difficulties Vet