An Update on That Bolting Stuff 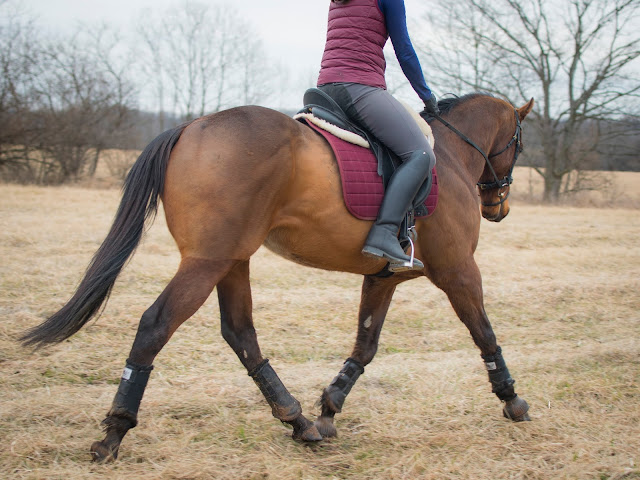 When I left off talking about Bast's bolting issues, I'd established that his issues were due to a lack of confidence. My confidence-building tactics seemed to be working, but we hadn't been working with them too long.

So, how have things been working out since then?
Honestly, pretty darn well.

While I 100% attribute Bast's improvements to increasing his self confidence, I feel like I need to go into more detail on what I mean by that. We didn't get to an improved state simply by patting his neck a lot and telling him he was a good boy. There were a lot of factors that went into improving his work.

First, and most importantly, I feel like Bast's confidence and understanding of his basic dressage training and acceptance of my aids in the ring made the biggest difference. Since last October, I've worked very hard to ensure my directions to Bast under saddle are very clear, and that he can easily decipher what I am asking and end every ride as a winner. He understands basic half halts now, and is reliably learning that I mean slow down when those happen. He now realizes that my leg coming on doesn't always mean "go forward", but sometimes "go sideways". Overall, he's learned to listen and think about what my movements mean, which has slowed him down and made him much less reactive.
Along the same lines, he's learned that sticking his nose in the air and straightening his body rigid does not get him out of work/his own way. (Note, this isn't to say he's lazy or mean, just like any baby creature, he hasn't yet learned that things don't always happen on his schedule. Haha.) As his bolts all featured a rigid head and neck, learning he is expected to flex and bend has gone a long way to gaining control over his brain and body when he panics.
Beyond basic training, we worked hard on gradually increasing Bast's comfort zones. Under saddle he felt confident under saddle in the indoor arena from very early on. Part of this was the sensory deprivation of the ring, where he couldn't see and worry about other horses. I became the undisputed leader of our tiny herd. He started looking and listening to me in times of worry and uncertainty. The outdoor took longer to build comfort levels, but gradually he learned that I am also the person to look to in the outdoor.

With that understanding, we moved on to neighboring fields and open spaces around the farm. Just like with the outdoor, we encountered other horses (Horses running in fields! The horror!), scary breezes rattling trees, and the most terrifying of all ... being out of sight of the barn. These encounters made Bast nervous, and he would often scoot forward a bit or try to go rigid in his head and neck. This is where the confidence in his training came in. I would ask him to bend his body onto a circle, or leg yield a bit without scooting forward. This kept him thinking and shortened his reactivity. Eventually he would let loose with a sigh, and we could hack out on the buckle for the rest of the hack.
With time, those tense beginnings requiring constant leg yielding and circling have shortened. We haven't completely outgrown them, but now they are no longer the biggest portion of our rides out. In fact, walking on a loose rein comprises the majority of our mini-hacks at this point. I've even felt confident enough to add in small amounts of trot sets, which have not resulted in break downs.

Cantering is another ballgame, however...
Yeah, so, of course there have been setbacks... The other day, after a brilliant ride in the outdoor, Bast and I were headed back to the field board barn. At a barely perceptible cue, he picked up a delightful forward and controlled canter. With a slight half halt, he came back down to the trot, and then again to a lovely and relaxed walk. I turned him around intending to pick up the other lead and canter back again. However, I rushed things and he ended up reacting strongly and attempting to turn between fields to head back to his pasture at blazing speed.

His power steering was gone, but I knew I had to turn him before we ended up galloping on the slick driveway. I attempted to turn him, and we ended up galloping straight at a pasture fence. Eek! I kept his head turned until we were almost on it, and hoped his sense of self preservation would keep us from dying. Thankfully, when I let him straighten out just before the fence, he saw it and slammed on his brakes, nearly sitting down to bring us to a stop.
What's amazing to me is that he then walked away calmly. Despite our small moment of terror, he came back to sense so easily and completely that we were able to just walk back to the barn on a loose rein. I can't complain about that!

Since this day, we've gone on several more hacks, even exploring further away from the property. While there have been moments requiring leg yields or circles, he's been very good. I'm so proud of his progress!! 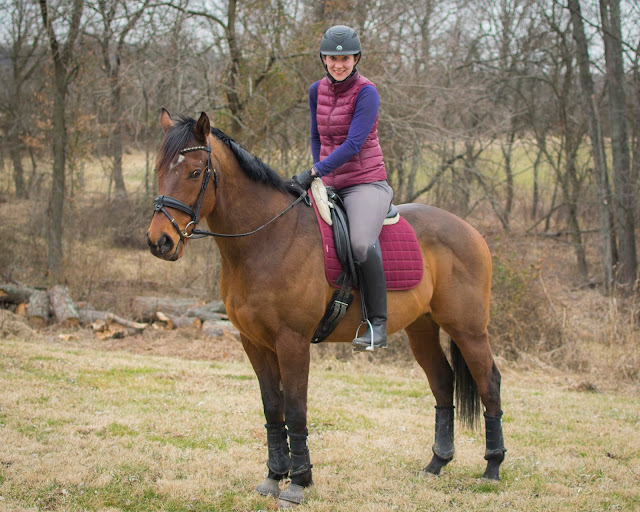