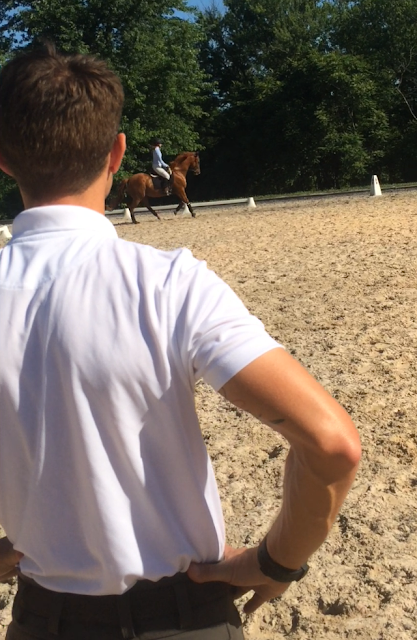 I'm not the sort of rider who falls apart too much without regular instruction. Plus with Pig's goals accomplished, I haven't had taking lessons at the top of my to-do list. Still, when Stephen Birchall said he was coming out in June, I knew I had to get a ride scheduled.

I know regular lessons are better for my riding and push me to get more out of my horse. I also know my position has gotten incredibly weak from riding with a mind to Pig's limitations. Stephen pretty much called me on both of these things immediately.
"Slow him down. You can't supple him when you're pushing him to trot at mach 10!"Stephen called out after watching our warm up trot for a few minutes.

I had started off at the walk, but pushed Guinness into the trot a smidge before he was ready for it, in the interest of not being late. That did not pay off for us. By the time Stephen turned his attention to us, Pig's trot was still pretty tight in the back and neck. Not terrible, by any means, but not the incredibly supple work he's been handing in recently.

"You have to ride him in a place of a little more soundness to get him to come through. Bring him back until you find more regularity. Bring him back, but don't let him break." I know that when I slow Pig down it's easier to talk to him about loosening up his body, but for some reason I have been forgetting to use that tool.
When we finally had achieved a more regular and slightly more connected trot, Stephen moved on to fixing my positional woes, which were multiple.

"I'm going to come over there and pinch your shoulder blades together. Sit up! No, not enough. More. MORE. SIT UP!!"
My upper body has started to go rogue in the last couple of months. Mainly from riding Pig when he's been a little off. I let him convince me to slack of the pressure of my position when he isn't feeling 100%, and I need to stop. Slouching isn't really helping anyone. Stephen drove home my need for more upper body accountability by reminding me, "He keeps popping up because his back is tight, so you have give him a comfortable place to go by sitting up."

As we moved into the canter, where we spent most of the lesson, Stephen gave me one more good reminder. "Dressage riding is a lot like body working. You can feel where the horse is tense, it's your job to help guide him through the tightness. You have to help him work out the kinks and tough spots."

I was encouraged to push Pig away from my leg, moving his shoulders in and out. Stephen wanted me to emphasize the true bend of the canter first. If I needed to slow things down to find the right balance, so be it. The bend stayed until Pig relaxed into it.

Then we did shoulder fore in the true canter. Stephen remarked that we've worked on this, which we have in a way. I've been striving for control over those shoulders for awhile, I just haven't really worked them in the canter. Glad to see the work is paying off.

The shoulder fore work bled into work "leg yielding" in the canter, to help loosen up Pig's back and get him stepping up more with his hind legs.
I had mentioned to Stephen that we needed work on the canter, especially in obedience and balance in the half passes. So we quickly moved to counter canter, which is where the real lesson began.

We counter cantered for nearly 20 minutes in each direction. Walk breaks were incredibly minimal. Pig and I both worked our asses off, and I was incredibly proud of both of us for rising to the occasion. Stephen mentioned that I need to be working in the counter canter much more often, at least 10 minutes in each direction during our dressage schools.

Our neglect of the counter canter was immediately obvious to Stephen. Pig was nervous and stiff in the movement, anticipating a change. I was struggling to sit the damn thing, instead relying on my reins to keep the flexion. I was too afraid to accidentally cue for the change.

So we counter cantered around in an exaggerated true canter bend until I could establish a real half halt, off my seat and weight rather than rein and leg.
Things went fairly smooth to the left. However the wheels fell off a little to the right.

In the right lead canter, I had a tough time keeping the left shoulder contained. As Pig steps shorter with the right hind, this isn't too surprising. However, the tenacity of the bulging left shoulder cannot be underestimated. Until I get that shoulder under control, I have no ability to half halt. Pig will simply get more and more tense and "stuck". I find it hard to sit a tense Guinness back, and am often bounced up out of the saddle. This makes half halting from the seat impossible.

I had to take a lot of corrective actions to fix the left shoulder issue. Dropping my left seatbone onto the shoulder to move it over helped, as did moving onto a circle where I could exaggerate a shoulder fore. Straight lines are the enemy for this type of control, as they just allow Pig to stay tense and bounce me out of the saddle. Picking up his left shoulder means putting more pressure on his right hind, which is the bad leg. It's not totally surprising we have this issue, but it's also something I should be more prepared to fix. On the circle I am able to create a better canter and relaxed back, giving the the ability to again sit for the half halt.
With the counter canter solid, we started working to refine the change button I hastily installed last fall.
We started by straightening Pig in the counter canter, without changing rhythm or losing suppleness. Then we went back to true bend. When that move was solid, I was to work on changing the bend, just a little. Then we went back to true bend again. Finally I changed the bend and added leg cuing for a change.

Some changes were late, and some were misfires, but the relaxation in the change was improving rapidly. Both Pig and I learned a lot of good lessons about waiting here.

We left with a lot of homework. I need to refine my position. I'm a better/stronger rider than this, and I need to work harder. We both need to work on the counter canter more. Its strength and balance building is what we need in our life to improve the front end lift of the canter.

Overall, I was very pleased with the work we both put in for Stephen. Pig is in the beautiful place where he understands the work now, meaning I can push harder without fear of an explosion. He's strong, and ready to rock.
Labels: clinic counter canter flying changes lessons Stephen Birchall