No such thing as a bad show

Friday morning, I woke feeling like maybe my intermittent illness had finally abated (spoiler alert: it came back on Saturday, again.). When 3pm rolled around, I happily headed out the barn and made an attempt to memorize my test.

When Pig was incredibly distracted and nervous as I was tacking up, I knew I'd made he right choice to show in the double. When his mind is gone, he's almost impossible to keep together in the ring. Having the double to help me encourage him to tip his nose out is very helpful in keeping his brain in his head.
In fact, our warm-up went from snorty, spooky, and inverted to quite through and fluid. Guinness's gaits felt quite good, with a lot of jump in the canter and suspension in the trot. He was even very consistent in the bridle, and willing to take some input from me. We did a lot of walking (leg yields and turns on the haunches), some rising trot, some canter (departs to right lead and counter canter only. NO changes schooled.), and finally a little sitting trot. He felt great.

Unfortunately, all of that good preparation was for naught. We ended up walking around or standing waiting for our turn to go, and Pig's brain left the building. He thought he was completely done, and he went so far as to try to exit stage left. Bad. Pig.
By the time our test came around, he was testy. Anything that was hard in the direction of the door, he completely balked at. This resorted in some hilarious tantrums, which mostly made me a laugh hysterically. I would say that his tantrums were disappointing, as they rendered the test nearly unrecognizable, however I was honestly very happy with the test. Why?

First, the double proved to be a useful tool and something I feel comfortable showing in. Pig was just as solid in it as he is in the snaffle, and it helped me ride him a little more aggressively in places where I otherwise wouldn't have been able to do so.

Second, the things that were good in this test were VERY good. And some of those things are pieces we really haven't put back into schooling for that long.


Issues:
Test video:
Note: Things were pretty wonky due to Pig's tantrums. You'll notice I go off course a couple of times due to them. And I almost go off course right at the start (wavy line at far end, and forget to turn up the centerline at C after renver meltdown). There's also a jump in the middle where the judge thinks I went off course, the video stopped in the middle while I hashed that out with the judge (I was actually correct).

For for anyone wondering, tantrums like this are not abnormal when my horse is tired/done and at home. I'm actually fine with them, because they are ultra rare or less dramatic at away shows. As this was in our home arena, I would expect them to be worse. 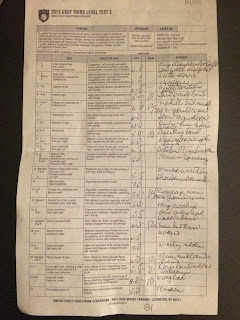 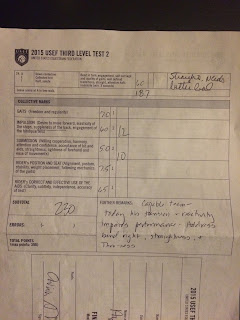 At the end of the ride, the judge stopped me and said, "That was the hardest thing I've ever had to judge. Either he was a 9-10 or he was a 0, often in the same movement!" She commended me for his work, saying she was very impressed with the work he turned in, calling him "very talented." She went on to describe him as "strange and difficult". which made me laugh.

She was flummoxed at his seemingly sensitive overreaction to a quiet aid, but willingness to take a spanking and hard riding to get him back to work. At this I just shrugged. "Eh. We're just an old married couple poking at each other's nerves. We both know exactly how much we can get away with." At that, she laughed.

We walked back home and I put Pig away.
I think he could tell my overall mood was pleased, despite his iffy behavior in the ring. Overall, it was a solid first ride through 3-2. I see a lot to look forward to this season!