Well, guys. It's been a hell of a two week period. I haven't written mainly because I haven't uploaded the video from my lesson with Nancy yet. I'm a mess. Officially.

Unfortunately, Guinness smashed the front of his left cannon bone (yep, the same one he injured mid summer) on something during his rest day after the lesson. He has not only sustained a semi-deep cut across the leg, but a substantially painful bone bruise. I'm so over bone bruises. Seriously. This is two.

Bring me all your bone bruises, I shall rehab them all...

Anyway, this has meant two weeks without riding. Nada. Luckily nastily cold weather and home organizational projects have made the time go by. In fact, this was probably a needed break for both Pig and I, though we had really been hitting the groove of putting together our First Level work and really starting to dive into Second Level things. Sigh. There's never a good time for an injury.  Plus side? My closets are super organized, and Goodwill is getting So Much Stuff.

The last few days, I've been gradually riding Guinness some. He's still obviously off at the trot, and in circles to the left. I feel, however, the easy movement of walking and road hacking is better for his chances of healing than standing, bored, in a frozen field. The herd just hasn't been moving much on the broken, frozen tundra of doom that is the field in the recent weather. Evenings are just starting to be long enough to squeeze in a 4 mile walk around the "block" before dark really falls, and the roads are clearer and softer than the surrounding fields.


At least it's time in a saddle.


One change has been in bitting for hacks. Recently an energetic Guinness has been lacking in the brake department. After blowing through my halts for a couple of acres on our last high energy ride, I decided to equip Guinness with an emergency brake. Note the pelham: 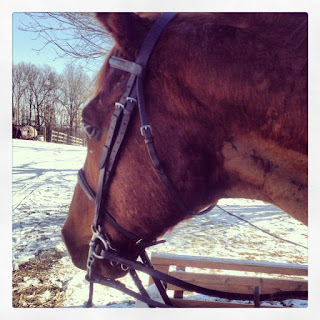 So far, I've been happy with the change. The mouthpiece is a mullen mouth, and I do ride with two reins. The first ride in the thing I was a mess of forgetting how to manage two sets of reins. Seriously, guys. A mess. I don't understand. I can walk two Siberian huskies, both leashes in one hand, and give corrections to them each individually. But two reins? OH MY GOD. Just good practice for a double, right? After all, that's one of the reasons pelhams were invented.

I read about the Global Dressage Festival's sessions and realized I want to be Ingrid Klimke. In the same moment I realized this may also be impossible. I also learned about suspensory injuries and what might be the cause of them. One take away? Remember to work calmly towards your goal, and not to fight with your horse (I sense a theme?).

Dressage Radio Show featured Dr. Timmie Pollock, an equine sports psychologist. She really emphasized the link between tracking your progress with actually progressing. Journaling rides right after you're done, and keeping a plan in your head for each ride/week was one idea she threw out that I really liked. Another idea is visualizing your tests, really thinking through each movement and preparing your approach to each portion of the test. I always struggle with this, and her idea to record yourself talking through the test and playing it back to yourself is an idea I really like. One great way to do this? The USEF dressage test app (Click for iPhone app) already has the capability to record your reading of the test and store it for listening at a later time. I highly recommend this app. (Full disclosure? I use it when stewarding warm up rings at recognized shows. It helps me figure out where riders are in their tests, which helps me get on deck riders to the ring without wasting anyone's time.) Also worth hearing? How people with ADD work better in high stress situations. Hmm ....