Good Rides, Bad Rides and Everything In the Middle

Oh the joys of training yourself and your horse for a show season ... I mean, oh the non-existent joys.

The past couple of weeks have been rough. We've been sticking to the schedule (for the most part), and at least riding 4 days a week. I've also been lengthening the time of our rides to try to increase cardio and strength for Guinness. Me too, it turns out.

We've had a few breakthroughs, mainly with my position. After spending a day in my jumping saddle, I realized that I have been very weak in the upper thigh. I've been practicing closing my hip angle and really controlling every movement in my body as well as keeping my lower leg OFF unless I'm giving a command. This seems to be really helping Guinness. He responds much faster to my requests for bend, and to forward aids. Now, if only I could manage to ingrain this quickly! After a week of strictly working on this, I seem to be sore, but still having to think about it every step. Come on muscle memory ...

The Week in Recap:

Monday:  We went for a long harrowing trail ride (Okay, truth? It was only 4 miles, but it felt like FOREVER!). Guinness was a mess in the cross ties. He couldn't stop dancing and calling and crying and prancing and ... just being a pain. I thought a long conditioning ride/trot would help calm him down and we could have a relaxing long walk.
Nope.
The first indication that this ride wasn't going to be "relaxing" was the gigantic leap across the small worm-sized stream of water at the outset of the trails. After dragging myself back into the saddle, I managed to pilot us through the narrow tree-filled trail. It was a close call, and I promised to take more care. Good thing too. During the duration of the trip Guinness spooked at cows, ran from a pony, couldn't manage to walk in a straight line, never looked forward for more than 3 seconds, was completely unable to take a long rein without losing his brain and jiggling his head up and down to rattle the bit (racehorses ...), leapt a creekbed from edge to edge, three times and sweat so hard it took two baths to get him clean.
It was a long evening ...

Tuesday: I planned to do a conservative ride, considering the previous day's antics above ground. I was pleasantly surprised that Guinness wasn't lame at the outset. Not even stiff. The larger field, grass and more exercise seems to be helping keep his stiffness under control. Also, warm weather. That helps too.
We mostly worked at the walk, practicing my hip angle thing and taking contact without changing rhythm. This has always been difficult, and we've been neglecting our walk work. I got a few angry backups and head tosses when confronted with contact, but after I remembered to keep my hands up and close my fingers we did much better. Constant contact. It's not just an email program I use at work ... ;)

Wednesday: Guinness' day off! I took the dogs running and put things away instead ... it was fun. Turns out I miss being at home sometimes.

Thursday: Canter work and bend. We started off just the same as Tuesday, practicing taking contact and keeping it constant. Then we moved into the trot and the canter and worked on bend. Lots of bend. I really got to practice keeping my hip angle closed and my legs OFF except when I wanted to use them to say something.
Going to the right I had a LOT of resistance to bend. Guinness was popping his shoulder to the inside and just bracing against me. We did some work (at the canter) that we practiced in our clinic in February. Basically, the thought is to loosen him up to the bending aids by pushing him over hard in the leg yield. We're trying to make him exaggerate his cross over and sideways bend. I don't care if his shoulders lead, I just care that his whole body bends. It's a little extreme, but it works when he's really locked up.
Needless to say, a couple of these extreme leg yields and he was much more receptive to bed.
He felt pretty good, so we ended that and went for a short ride down the road with a friend. It's always good to end on a good motoring walk note.

After our ride, I had Hannah help me take some updated conformation shots. They aren't glamour shots by any means, but they get the job done! 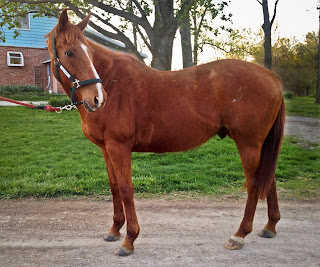 You can see all Guinness social-climbing battle wounds. He's out in a new field with a bunch of new horses (15 or so?). He's been slowly climbing his way to the top, which is funny because he's usually the most laid back horse in the field. Now, he's on top and seems happy to be there. I'll have to post the video of him bolting to see everyone from the other day ...

He's starting to get some ab muscle, and his butt muscles are getting more defined. I can really see how swaybacked he starting to look. It seems that his withers are SO MUCH higher than they used to be. Of course, his neck is starting to develop more and more along the top, so that helps. I'll write about saddle fit soon, since that has a lot to do with the topline in this photo.

Guinness has the next two days off. I'll get back on him on Sunday and see how he feels