Guinness and I are now 4 weeks into our 2nd barefoot attempt. So far, we are holding everything together- and I am seeing improvement. First of all, my horse is not lame. Unlike the first time I had his shoes pulled, he is walking alright (though carefully) and able to trot soundly on pavement or mud. He is developing a very smooth and calloused sole, and it is no longer flaking off every time I clean his feet. This is a definite improvement over shoes!

Now my focus has become addressing his various foot problems to continue improving his feet, movement and overall enjoyment of life. A difficulty has been the environment in which we live, which is incredibly rocky. If you look at photos of our boarding facility, you can see that even the arenas are filled with rocks. These aren't nice smooth rocks either. Guinness would tell you that these are evil, sharp, deadly rocks. Oh well.

Taking these rocks into consideration our first few weeks were spent either barefoot working on the pavement, or booted and turned out in the soft arena. Finally, I took the boots off (after they got pulled off, that is) and turned him out in a big muddy turn out. There were lots of rocks, but the deep mud helped him to avoid any bruising. He was fine, and felt much better about being able to move around sans boots. The boots we have been using are a horridly destroyed pair of Old Macs Originals. I have to vet wrap AND duct tape these suckers on, and they still fall off! Ugh! I am waiting on our new pair of Cavallo Simples to come in. Hopefully soon!

Guinness's feet have been churning out lots of new growth, and I ended up doing a self-trim on him yesterday. I wanted to do a bit more roll on his wall to try to tighten up the flare he has, especially on the quarters of his foot. In addition, his walls were getting a bit longer than his sole. Despite being woefully out of shape for the trim (seriously, ow soreness today!), it only took about an hour. I feel pretty good about my work. The roll is pretty apparent, and even. Guinness was a little sore, I think due to the extra pressure on his sole. Today he started off very carefully on our road walk, but about halfway in he cheered up and started stepping out. I think he just needed to get used to the new feeling. I'm going to try to keep him booted in turn out again, just until he gets more concavity to his hoof.

The photos below come from last week, before I trimmed his feet. You can see how long and deformed his heel is, and how bowed the front of his hoof is ... 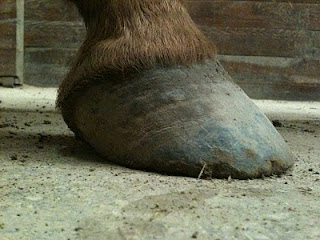 In the next photo, you can see how his sole is starting to take on that hard, shiny (almost waxy!) look of a good callus. As we work more, I hope that this keeps forming. His constant loss of sole is what I was really concerned about while he was in shoes, and I feel that issue is being resolved 100%. In this photo you can also see the hugely stretched white line. I'm hoping that by keeping his feet rolled at the wall, this will eventually go away as his foot grows down. 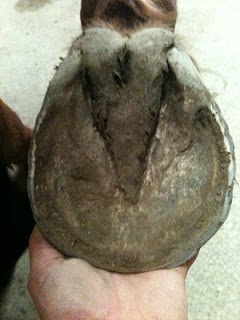 Today we went for a long walk on the roads, and as I said he was much more comfortable after and during this. Just to fight any soreness that might be accumulating, I decided to treat him to a night of Magic Cushion.
Application of this sticky, red, smelly substance is always tricky. Of course today it was more so. Guinness decided to put his foot down before I was ready. He slammed it down on the plastic before I could catch him. Of course, the Magic Cushion made his foot slip, which freaked him out, and he proceeded to leap backwards in the cross ties.
Oh Guinness...
Luckily all was not for naught, and I was able to patch up the packing on the bottom of his foot, wrap it in the sticky plastic and start duct taping. The whole time he was convinced his feet were going to slide out from under him, of course. And, we did leave a few nasty sticky footprints down the aisle way. Oops!

The best thing about having Guinness in Magic Cushion over night isn't the anti-inflammatory benefits, though those are nice. No, the best thing about Magic Cushion is the fact that my horse has BLING! Seriously. I used enough duct tape to circle a small nation to attach everything to his feet. Light catches his feet and you can see them from about 8 miles away. It's hilarious! 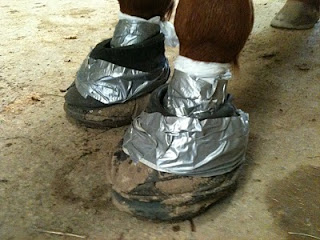 I know I talk about my GP's hilarious personality, so I had to share this photo from this morning's turnout time. When I came out to catch the horses and put them away, I found this in the middle of the ring. Yeah, that's my horse. Yeah, he's holding his own halter. When I opened the door he was playing tug-o-war with Raven using his halter. As I walked in, he pulled it away from Raven, and waited till I walked up to him. He then dropped his slobbery halter into my hand ... 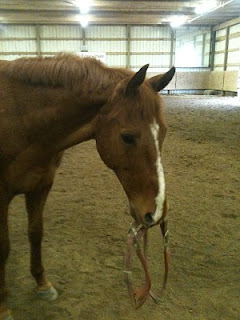