Time Flies, But The Changes Keep Rolling In 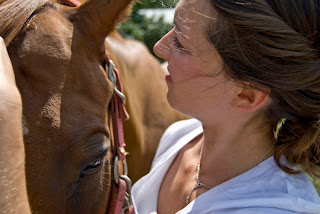 Watching the summer days go by has been both an exercise in patience and a study of exasperation. With each turn around, it seems Guinness and I make a stride forward, and then 2 strides back. At least our reverse is getting good.

Our goal of going to a hunter/jumper show this summer seems like it may not pan out. Maybe later in the fall. Right now, all the local shows are either cancelling due to lack of participation (stupid economy!) or we can't make it due to work or other scheduling conflicts. The one show we were set and ready for, Guinness went and picked a fight. Of course, the other horse beat him up, ripping open his side and giving him so awesomely nasty hematomas on his butt. That took at least a week until he wasn't sore on that side any more. Since then, we've been plagued with wounds of all types and sizes, not to mention the thrush -which is rampant this year.

His most recent injury is a nasty cut on the side of his face. The barn workers found it on Wednesday morning, and gave me a call. Of course I rushed out from work to take a look at it, and ended up cleaning his face wounds in high heels and a dress. Hes such a good boy for me, though and stood through it all - not even dirtying my clothes! The vet was right out, and stitched it up - under the watchful eye of Christian.
Yesterday afternoon, however, I found a depressed and needy gelding who started calling for his Mama as soon as I walked in the barn. A bright yellow and slightly creamy snot was FLOWING out of his nose, creating a puddle of gross. His nose was crusted up like a 5 month old child who doesn't know how to wipe his face yet. His wound was pulled at, and starting to weep down his face. In short, he was a total disaster. And damn was he cuddly! He kept shoving his nasty face into me and just holding it there, as if begging me to make it all better. How adorable, if snotty. My vets came out, and gave him some antibiotics via shot and some oral ones to get him through the next week too. 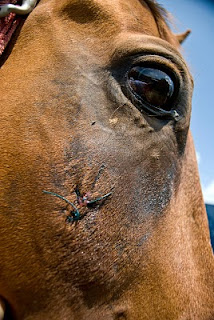 Stitches before they got all infected and gross like! We're thinking that something traveled from deep inside the wound into the sinuses, or that his current sinus infection caused him to itch his face on something sharp.
The vet visit highlighted a behavioral issue I've been trying to work with with Guinness since I brought him home. The poor horse has some issues with feeling trapped. When I first brought him home, he would freak whenever I touched his ears (and still does, if I catch him by surprise). Freaking, in this case, is exemplified by pulling back, hitting the end of the crossties/rope, and rearing. He usually snaps out of his halter at this point, backs up and wanders off. Sometimes, if he's really spooked, he'll be a touch hard to catch. But, it's not much of an issue. He doesn't run from me. I've been working on this issue with GP since I bought him. I've discovered that moving too fast or making an abrupt approach really weirds him out. He's forced me to slow down the way I interact with him, and that's been all for the better. He trusts me now, and I can move fast around him, but I sometimes forget that he's not an easy horse to get the trust of. My vets do not have his trust.

Vet S moves slowly, speaks quietly, and typically doesn't have too many issues with him. Causing GP any pain, however makes him leery of S. Vet J is a completely different story. She's a fast mover, a fast talker, and is loud. Guinness really does not appreciate this. When she handles him she just walks up and does whatever she needs to do. This finally came to a head last week when Vet J came up to try to tighten the clinches on Guinness' front shoes. She came a little fast, and started sawing away. He reared, popped his halter and slammed his foot down. He missed her, that time. When we tried again, he ended up catching her with his front leg and dragging her down the aisle a bit before extricating himself and spinning off. She was fine, but I think he hurt her pride a little. Every since then, she bad mouths him as badly behaved and crazy.

I might be wrong here, but I think this is utterly unprofessional. I completely agree that my horse was badly behaved during that moment. But any horse that lets me clean a huge angry wound on his face while I'm in high heels and doesn't even get me dirty - he doesn't have a problem. I feel like the guilty party here. I need to start standing up for my horse, and for his needs when it comes to stranger interactions. He's just sensitive, and it's unfair to him to not have me be his voice when he has to be handled by the vet. I need to stop getting intimidated and just open my big mouth a little more. 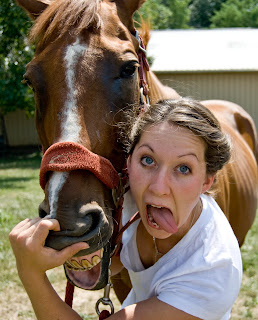 Remember kids, always speak up for your horse. He can't do it for himself!
Finally, it's time for summer updates. Overall, everything with Guinness has been going rather swimmingly - when I get to ride. In between my week-long camping trip to the great unexplored North (the Boundary Waters of Minnesota, a GREAT time!) and GP's injuries, I've only been able to ride a bit. He's falling a touch out of condition, but I think he's back on track (or WAS until this newest disaster sickness!). We were on target for a combined training show at the end of the month that we were going to just school. We've never been off the property before, and it seemed like a good idea to just take the time to learn to be together in a new place. In September, I have a dressage show scheduled. This promises to be fun - especially since we've been doing almost nothing but dressage schooling for the last month. We are getting really good. I have some video of a recent ride, but it's horrid - maybe I'll post it later!
Overall, it's been a good summer - and definitely a learning experience for me as a horse owner. I think everything that can happen to a horse has happened to mine. Except all the really terrible stuff. *knock on wood!* 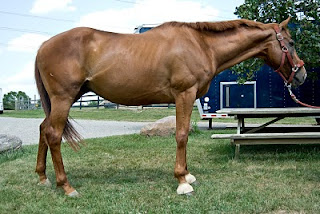 Condition shot for August! Looking good, though I think we might put on a few more pounds before winter. He's looking a little ribbier than I'd like.
I'm going to start up with monthly goals - hopefully to help me keep my posting more regular!
August Goals:
* Acheive a more secure and independent seat. My hands are starting to rely on my seat, and I'm a little unsecure - something that I'm not really used to! I need to start doing a lot more sitting trot and no-stirrup work.
* Fully memorize my Training level dressage test and video tape every move to fully understand how to improve it.
* Work on conditioning. We need to start walking up and down hills again to keep Guinness' butt more in shape and his hind legs under him! In addition we need to get out in the world a little more to solve our spookiness issue!
* Get to a schooling show before September! The Old Stone Horse Trials are coming up on the 29th, and I want to make sure we are ready for shows later in the year!
* Take shoes off in front, and examine to see if they can be left off again. Also, investigate further barefooting techniques to keep hind feet from crumbing and getting too long at the toe.
I leave you with a photo of my two best partners in crime. Christian and Sonka-dog. Aren't they two fine looking individuals? Huh? 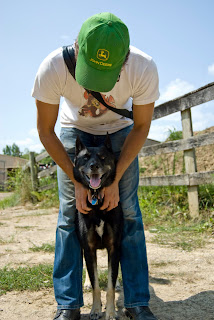