Sedation, or How Guinness Had the Worst Day Ever

Buying a new horse, bringing him home to a barn new to you, and meeting and dealing with a whole slew of new horse challenges can sometimes come to a head like it did yesterday. Whew. I am so glad it's over.

Since the end of November, Guinness and I have been battling a bit of a weight issue. For starters, he would lose weight. Then, just when I'd start to think he was looking like I needed to really boost up his feed - he'd look better. It was weird. I was concerned. He started getting 1 cup of corn oil added to his morning low-starch and supplements. He was already eating 6 flakes of hay a day, in addtion to pasture and round bales and getting a scoop of grain divided into two feedings (morning and evening).

Through December, his weight balanced out. While still a touch thin, he had stabilized. I wasn't too worried. Then January hit. BAM! Here I was feeling like a worthless owner with a ribby old gelding. After pulling my hair out, I called the vet. Diagnosis? A bad case of dental hooks (Some of which were punching him in the side of his cheek! Doesn't that just explain the wierd head bobbing?), and a positive fecal exam.

Here are some body condition shots to give you an idea of what we were looking for. I know he's not terrible, but he's not great either. His condition was bad along his neck and spine. 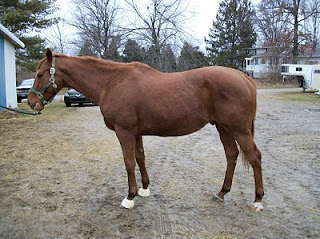 A shot of his side condition, on a good day. 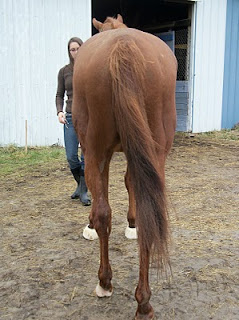 A butt shot. Look at his loss of muscle! Ahh!
A week later and here we are. Sedated as hell. The vet grinds down his teeth, stops a moment, and pulls out a hunk of ... rope? Wow, buddy. That's just nasty.

Hooks taken care of, Guinness got started on on a 57g Fenbendazole PowerPak (the first dose of which he promptly spit in my face). I'll keep you posted on his condition. Right now I don't feel like adding more grain or oil to his diet is necessary. I think once he's no longer wormy he'll start putting weight on. 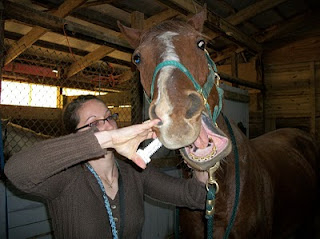 Next up! Sore feet, and how they suck.